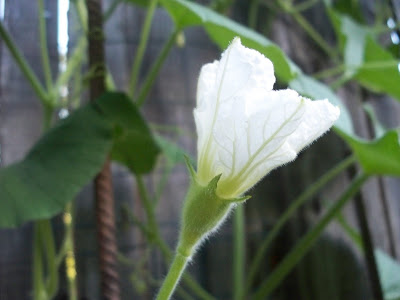 Lagenaria siceraria with nocturnal flowers.
Problem.  As I have mentioned earlier, I planted a variety of bottle gourd in my yard last spring and have successfully raised it to reproductive phase.  Hooray!  Several flowers - both staminate and pistillate have been forming daily starting from an early stage.   However, only one fruit per plant has developed and matured so far.  Back in the olden days in my grandfather's garden, I remember seeing several of green gourds of various sizes hang on trellises.  Using small twig, I used to write my name or draw hearts on the gourds that I can reach.   What's wrong with my plants?  How come fruit setting is so poor with my own plants?   I have made observations that might explain the sparse fruiting in spite of the flowers.
Explanation. The Lagenaria siceraria bears flowers that open at night.   They start to open at about 6:00 pm and remain open till the next morning - when they get spent under the scorching sun. Consequently, pollination happens at night also.   The plant depends on a nocturnal insect to pollinate its flowers.  Hawk moth has been reported to pollinate gourds.  Although I have not made the observation myself, this idea makes sense as most species of moths are nocturnal (they are active at night).   But there's one problem - with our dry climate, there is a lower population of these night-time pollinators in the area.   My theory is that the problem is due to limited night-time pollinators.
Solution.  When planting Lagenaria siceraria in the future I will also include planting more plants that open at night to attract night-time pollinators in my garden.   If my theory is right, then increased attractants should result in more fruits. 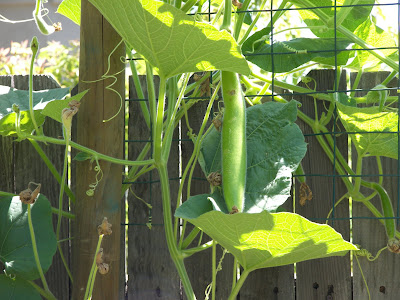 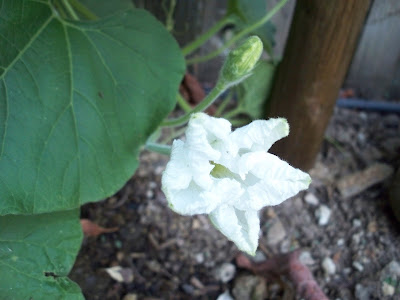 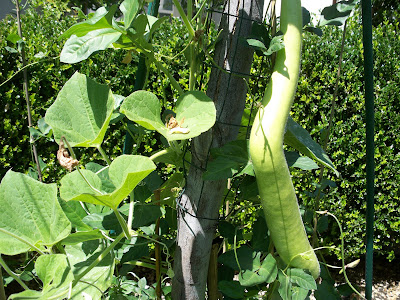 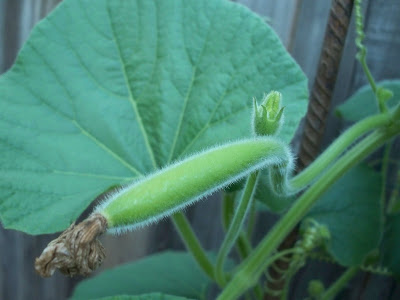 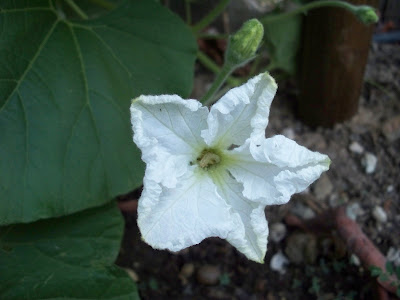 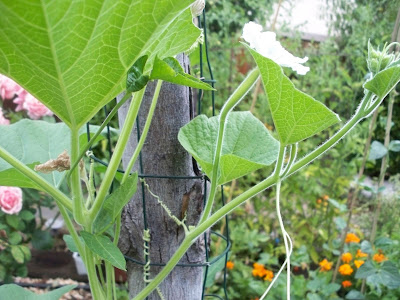 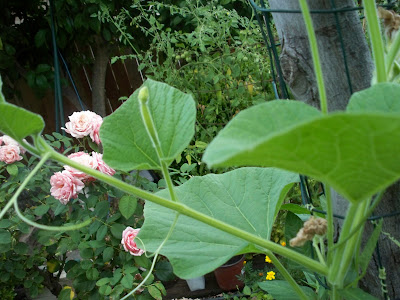 Staminate Flower
The Lagenaria siceraria  produces well in a tropical environment but not in the semi-arid conditions of my garden.  Sometimes we transfer an organism from one to another location and expect that it would behave similarly.   Unless we can simulate the conditions of the old place then we are just dreaming.
Posted by Helen Lewis at 11:20 PM

You may have to resort to hand-pollination. It's certainly worth the effort to get a few more of those big bottle gourds!

Grower Jim, I though about doing that but then it's late at night when they open. By that time I'm ready to go to bed and forget about garden stuff. I guess I can use set my computer to remind me. :)

Grower Jim again : "I thought of doing..." Sorry about the typo.

How did it work out ? What moth attracting plants did you use ?