Dahlias in my Garden 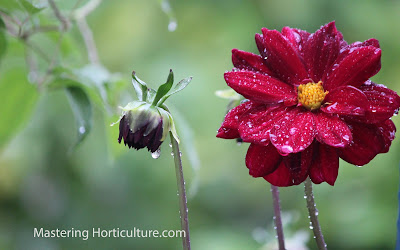 
One of the year's new plants in my garden is dahlia. Dahlia is a tuberous tender perennial known to have originated from Mexico. Nowadays, there are many hybrids that have resulted from breeding and selection all over the world. As a member of the Asteraceae family, dahlia is related to daisy, chrysanthemum and the sunflower. Dahlias come in different colors and sizes. As a beginner, I selected four different varieties that featured large flowers but slightly inferior in size to the dinner-plate varieties. 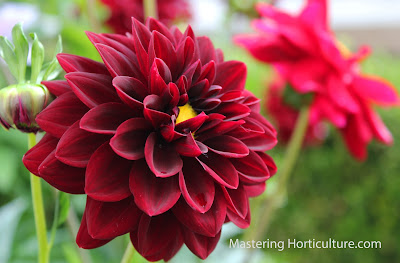 1.  Dahlia 'Arabian Night'.  Introduced in 1951 (Weijers), this  variety has the looks of a classic dahlia with its gorgeous black red flowers with contrasting yellow stamens (Fig.  1 & 2) in the center.  Being a semi-dinner plate, the flowers are large but not so large - four inches in diameter. Great for cutting, the flowers remain intact when they fade.  Of all the dahlias I planted this year, this was the first variety that showed the first blooms. 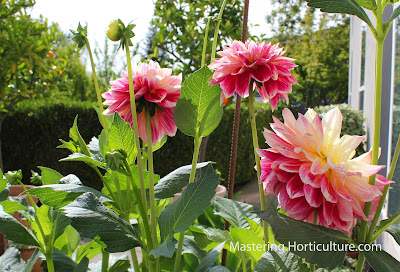 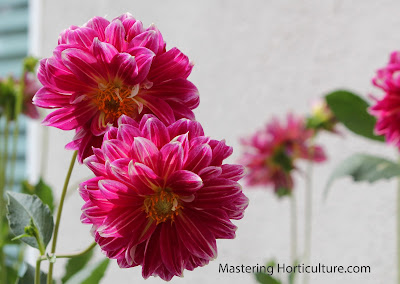 2.  Dahlia 'Stranger'. It is a vigorous grower with dark green leaves.  This was the earliest variety to emerge from the ground.  The flowers are creamy in the middle radially shifting to pink with white margins on the petals.  The height of the plants was between 3-4 feet.  The flowers last for a week and then the petals begins to fall.  Unlike the 'Arabian Night', the flowers drop its petals as it fades. This variety started blooming in May.  It was also noted that the earlier flowers (opening when temperatures were averaging in the high 70s) were more yellow (Fig. 3) than those that opened during the hotter summer period (Fig. 4.). 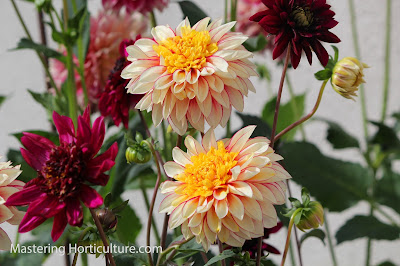 3.  Dahlia 'Pom-pom Mix'.  Apparently there were two varieties in this mix.  One was a  bright magenta with yellow stamens and not a lot of petals - relatively speaking.  The other one looks like a sunny side up - the center of the flower resembles an egg yolk against the creamy outer layers of petals (Fig. 5).  It was my observation that the plants in this mix lacked the vigor that was displayed by the other varieties I planted.  The plants are generally shorter; their stems and branches are thin and are prone to lodging. 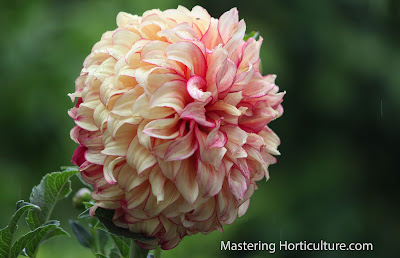 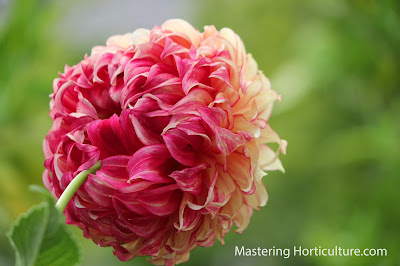 4.  Dahlia 'Lady Darlene'.  Huge mop-heads of petals in a gradient of red-to-yellow color are the flowers of 'Lady Darlene'.  From the front view, the flower looks predominantly cream - the petals being edged with red. It has massive flowers of enormous size!  The stalks are huge and sturdy and the leaves are dark green.  This was the last variety that bloomed.  I observed that the first flowers were more yellow than the succeeding ones where the gradient in color was less clear.Thus, supporting my theory that some flowers tend to exhibit less intense colors under high temperatures. Considering that this is a summer blooming variety, I must resign to the fact that the flowers will be mostly the washed-out version of  'Lady Darlene' in my Zone 9 garden.  However, I would presume that the Pacific coastal gardens will show the fiery red/yellow rendering of this lady.


This is the first time dahlias are grown in my garden and so far, I am very satisfied with the result and experience.  There were many lessons I learned about them which I will talk about in the future.


Dahlias are low maintenance plants but they require a lot of water to show their best.

Posted by Helen Lewis at 4:21 PM No comments:

"If all mankind were to disappear, the world would regenerate back to the rich state of equilibrium that existed ten thousand years ago. If insects were to vanish, the environment would collapse into chaos." ~ E. O. Wilson 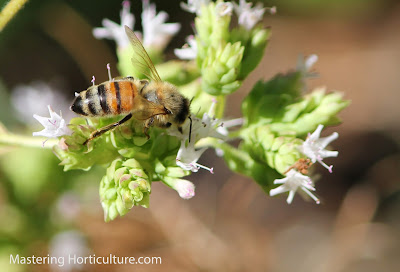 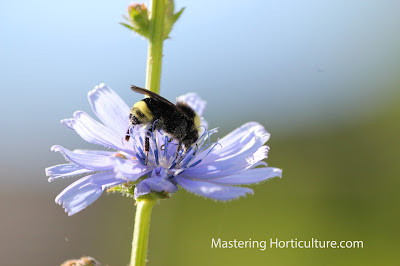 
Mastering Horticulture has a few suggestions on ways to observe Pollinator Week 2015:

1.  Plant at least three kinds of perennial herbs.  One type is good but three is better.  Sage, rosemary and mint - for example, when allowed to flower are all bee magnets.  They bloom at different times of the year and thus providing a constant source of nectar for the bees.

2.  Allow annual leafy plants such as lettuce, cilantro, radicchio, radishes to flower.  Let the beneficial insects have a festival in your garden.

3.  Add a water feature in your garden.  Our pollinators work hard all day, they need an easy access to water source.

These are very simple steps that will surely keep the pollinators working in our gardens.  I'm sure there are other ways you can think of.  Share them so that we can all work together in keeping the pollinators around. 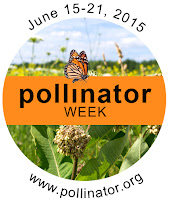 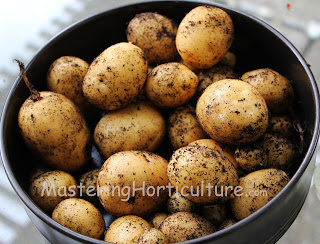 Posted by Helen Lewis at 1:48 PM No comments: 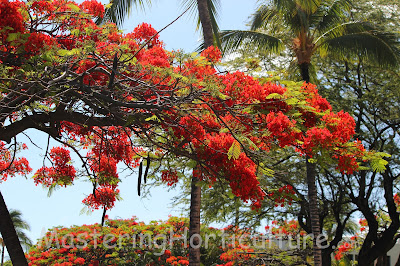 One of the trees that caught my attention during my (and my daughter's) recent trip to Hawaii Island is the Royal Poinciana Tree.  It has a spreading habit which becomes more pronounced as the tree matures (Fig. 1).  In some cases the width of the canopy is greater than the height of the tree. Delicate fern-like leaves cover the arching canopy.  Once a year, the tree puts on a show of bright red-orange flowers that come in huge clusters.  At the peak of the blooming season the tree is covered with massive blossoms at which point the foliage becomes insignificant. 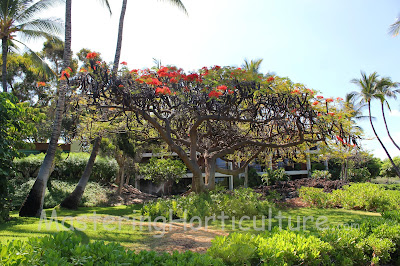 Fig. 2   Large pods hang beneath the canopy of Royal Poinciana

After the colorful show, some of the flowers develop into large pods - characteristic of the fabaceae family (Fig. 2) - which contain the seeds.  At this stage, the flamboyant inflorescence of the tree is taken-over by the interesting appearance of black pods that are supended under the canopy. 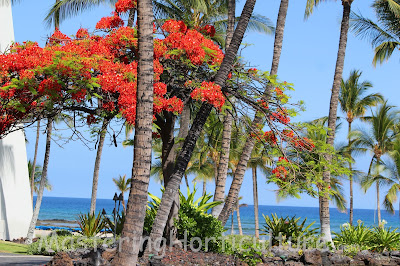 I have seen Royal Poinciana trees in the Philippines, Belize and even in the warmer coastal areas of California but I'm sure that I will never see it flourish in my own garden.  The winters here - although relatively mild - will not agree with the tropical requirements of this tree (Fig. 3).  However, I have read that its smaller cousin, the Dwarf Poinciana (Caesalpinia pulcherrima), can tolerate colder temperatures. Hence, I might still have hope. :)
Posted by Helen Lewis at 12:06 AM No comments: