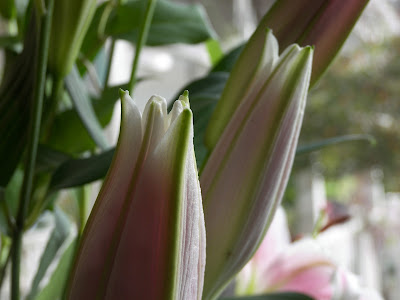 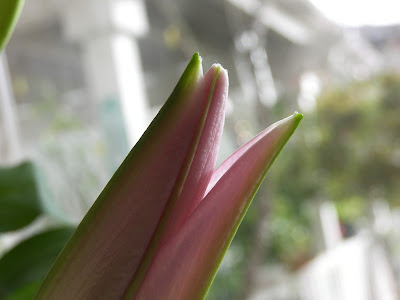 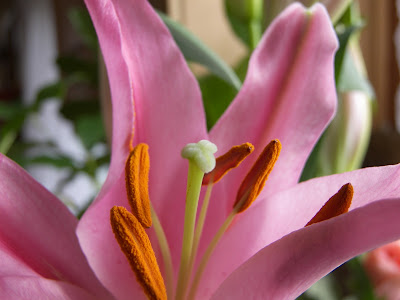 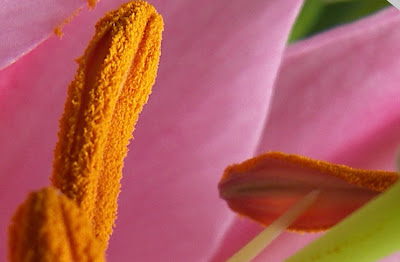 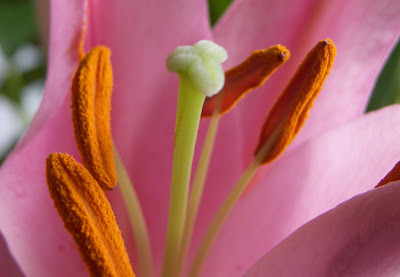 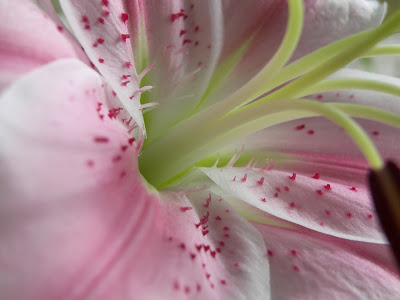 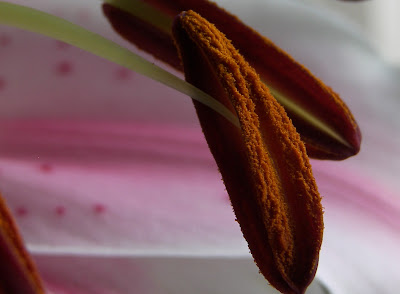 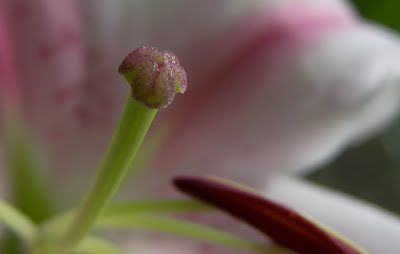 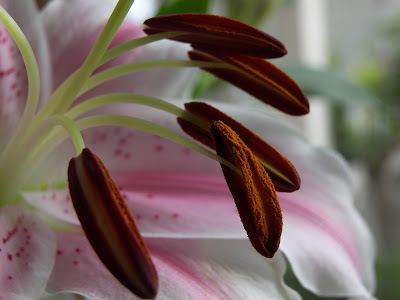 The filaments are white in the center and gradually darkening towards the stamen.
These stamens are beautiful...but today I had to ask one of my daughters to emasculate the flowers.  (Emasculation is the removal of the male reproductive parts of the flower, a procedure that is common in plant breeding.) The pollens contain natural dyes that can stain fabric - so this emasculation was done to protect the table cloth underneath the flower vase.  This is a recommended process for flowers that are used indoors - but since the sharp color of the pollens add so much to the beauty of the flowers; one can delay this process until the pollens begin to show signs of separation from the stamen.
“And why do you worry about clothes? See how the flowers of the field grow. They do not labor or spin.  ~ Matthew 6:28
Posted by Helen Lewis at 3:54 PM 5 comments: 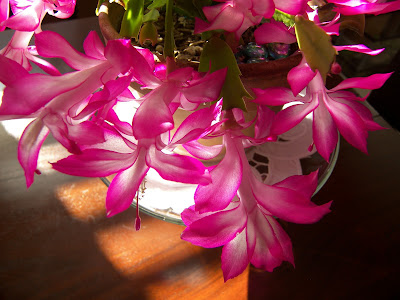 Schlumbergera truncata in bloom.
History. The Schlumbergera is a rainforest-cactus that originated from Brazil.  In Brazil, it is called Flor de Maio because it blooms from April to July, May being the peak of its beauty.  In fact it is a popular Mother's Day flower.   It was named, later on, after Frédéric Schlumberger (1823-1893), a Frenchman, who was a collector of cacti and other succulents (1).  The name "Thanksgiving or Christmas Cactus" was only part of a marketing strategy.  On this part of the globe (northern hemisphere), this plant happens to bloom during this time of the year.  Flowering period coincides with Thanksgiving and Christmas seasons depending on variety.
Origin.  To be specific, Schlumbergera is known to have come from the tropical rainforest north of Rio de Janeiro. They are epiphytes which mean that they grow on the canopies of trees. Perched up above and on rocks under the shade of taller vegetation, they are adapted to dry conditions and attenuated light.
Photoperiodism.   As I have mentioned many times in previous posts, flower initiation in most plants is triggered by daylength or photoperiod.   Schlumbergera is a photoperiod-sensitive plant.   In my garden, it is regarded as an outdoor plant.  It has been my observation that flower initiation begins sometime in October when daylength is between 9 and 10 hours, therefore they are considered short-day plants (flowering when exposed to daylengths that are shorted than 12 hours).
Schlumbergera can be manipulated to flower earlier or later by changing the length of light and dark period in a day (24-hour).  Short days can be simulated by subjecting the plants in a prolonged darkness (about 15 hours per day) for a period of one month.  Flowering can also be delayed by reversing the treatment - extend the days by providing few hours of artificial light before sunrise or after sunset.   When the flower buds begin to show, the plants can be brought out to normal conditions.    Artificially inducing the plants to flower is being practiced by commercial growers in order to coincide blooming with the best selling period. 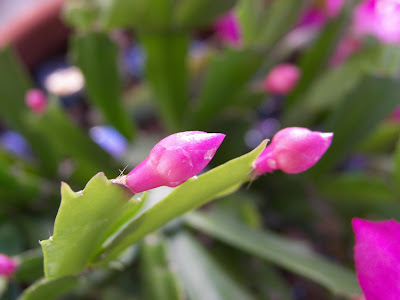 Flower buds appear on the far end of the stems.
Leaflessness.  These cacti do not have leaves.  Instead they have phylloclades.  Phylloclades are modified branches characterized by being flat and the ability to photosynthesize.  Although they are not leaves they perform the role of leaves for the plant.  Unlike true leaves, phylloclades do not fall (abscise) off with age; instead they turn woody and brownish because a new generation of phylloclades grow from the older ones (just like a lateral branch grow from a more mature branch).  In the absence of leaves, plants do not wilt.  Prolonged exposure to water stress result in shriveling of the plant which is preceded by observed lightening of the green coloration.   Flowers are borne on the apical end of the phylloclades. 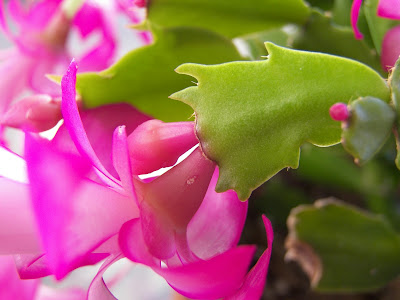 Soft serration on the phylloclades: characteristic of the Thanksgiving cactus. 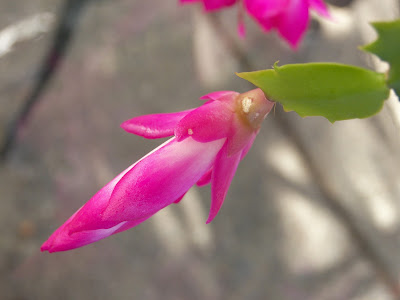 The perianth at an early stage (sepals, petals, and the tube). 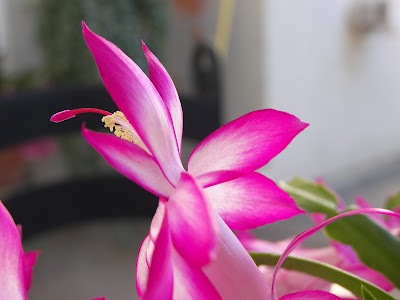 The perianth at opening. 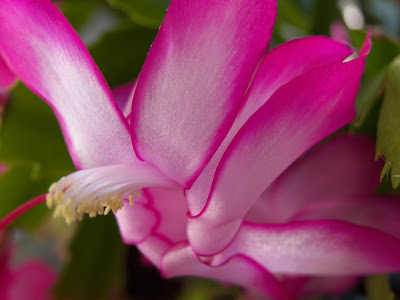 Reflexed petals.
Observations on the Flowers.  The petals reflex (bend backwards at an acute angle) further exposing the stamens and the anthers.   One peculiar thing that I noticed is that the petals right above the reproductive parts did not reflex upwards.  This tendency of the plant could be nature's way to keep the pollens dry - an adaptation mechanism that is necessary for rainforest plants such as the Schlumbergera species. 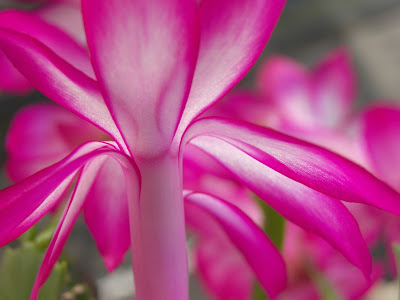 Picture taken behind the petals to emphasize the perianth tube. 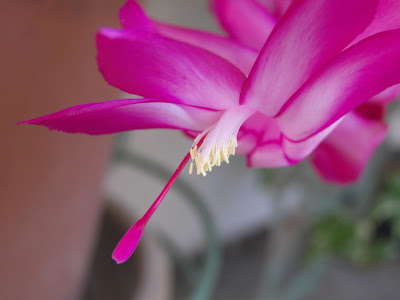 The stigma prior to opening has an ovoid shape... 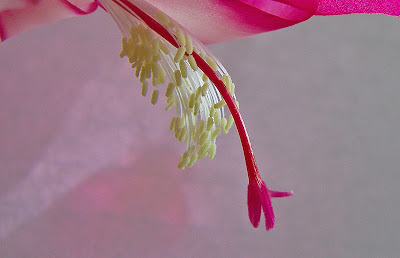 androecium (male parts) and gynoecium (female part)
The stigma extends past the length of the stamens - opening into a claw-like shape.   This is an important feature considering that the flower droops down at opening.  In this position the pollens conveniently falls into the sticky stigma - allowing successful pollination. 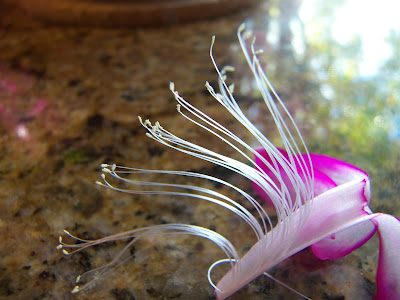 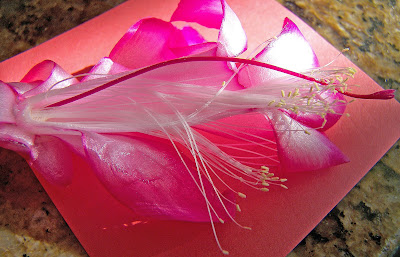 Inside the perianth tube. 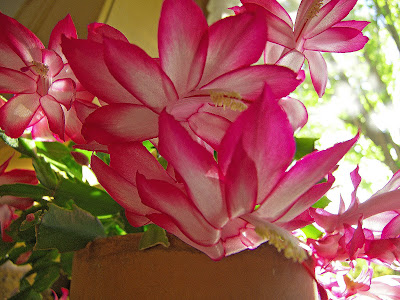 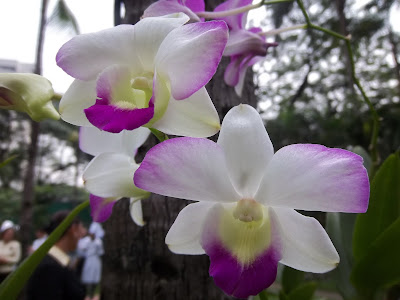 Orchids I saw at the gardens of the  Intercontinental Hotel (Makati).
The Mediterranean climate here in California allows us to grow a wide variety of exotic plants.  However, with my recent trip to the Philippines, envy crept all over me and my humanity gave in when I saw the way orchids are growing there.  I can grow them here but it would not be as easy as when they are grown in their native habitat.   Here we enjoy the dryness of the Mediterranean air and despise the humidity of the tropical breeze.  However, we know that the epiphytic-orchids feel the other way around. 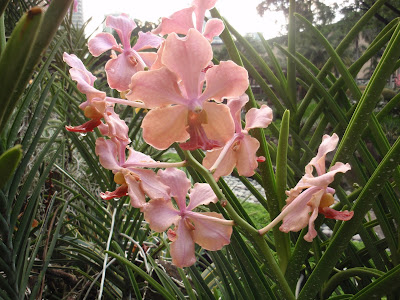 The Greenbelt Shopping Center boasts beautiful orchids that are planted between buildings.
Epiphytes.  Epiphytic plants (roots are above ground) like most orchids derive nutrients and water from the atmospheric air.   Orchids growing on tree trunks are a common sight in wooded areas of the Philippines as well as in home gardens and as well as in public gardens.  Gardeners bring these beautiful plants near their homes and they tie them to a tree and voila!  Unlike their terrestrial counter parts that have a prolonged access to soil moisture, epiphytes live in a more or less arid (zerophytic) conditions.  The roots, being in the air, are dry most of the time.  Water from the rain settles down way below the reach of the roots.  Sunshine not only provides the needed light and warmth to the leaves but it also lifts up the water up in the form of vapor.   Here in California, the air is so dry that it sucks even the moisture from my skin.   Before the orchid has a chance to drink a little, the moisture vanishes in mid air. 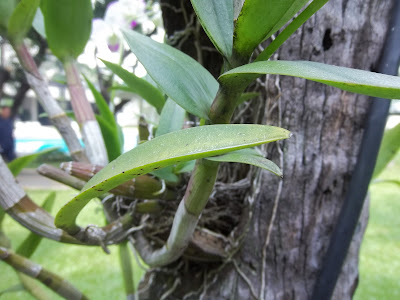 Orchids growing on trees near my sister's house in Cagayan.
Adaptation mechanism.  Orchids generally require 60-80 percent relative humidity for optimum flowering.  This high humidity requirement is not always achievable but orchids have adapted to the fluctuating available moisture.  Leaves come in different shapes (flat, folded, or even pencil-like leaves) and all these help the orchids adapt to their environment.  Most orchids have thick fleshy leaves, similar to that of the succulents that allow them to store water and resist drying out. 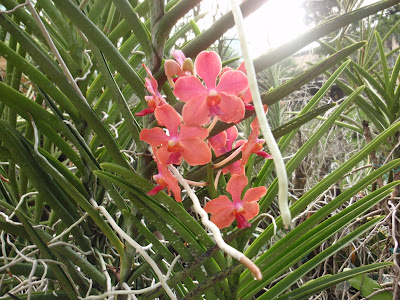 More orchids at Greenbelt, Makati.
The gardens provide a pleasant place to take a break from stressful Christmas shopping.
Orchids have specialized roots called velamen.  These are the white shimmery roots (as seen in the above picture).  These are the roots that are used to both anchor the plants and absorb water and nutrients from the air.  What is special about the velamen is that they are made of multi-layered thick cell walls.   The property of the velamen prevents cellular collapse during periods of dryness and acts as a barrier to water loss.  When the tips of the velamen are green it means that the orchid is happy. 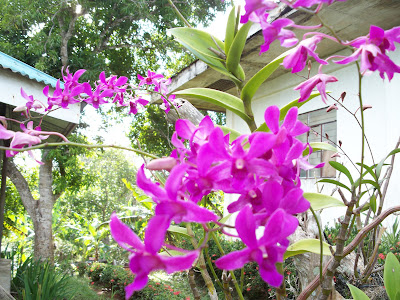 Orchids at my old High School (ANRVHS) in Abulug.
In the Philippines, just like any other marine tropical place, orchids grow voluntarily on trees.  The home-grown orchids likewise, perform naturally well.  On the contrary, growing epiphytic orchids here is like having a plant in ICU all the time. 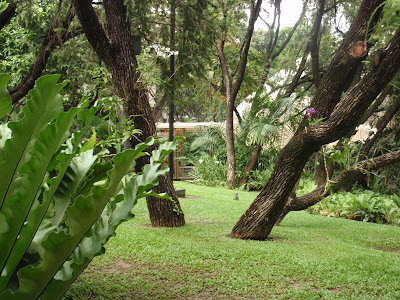 Many times I have tried growing epiphytic orchids here in my garden; so far I have not had much success.  Is it just me or is it the climate?
Posted by Helen Lewis at 8:30 PM 9 comments: