Fall Flowers in My Garden 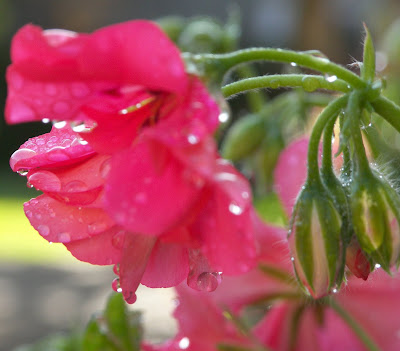 If you are wondering what plants are good for the fall and winter season, this is the time to make your observations.  It is good to go to garden centers and see what they are selling right now.  Drive around your neighborhood and see what plants are blooming or looking good right now.   Even in your garden, there are things that are blooming and staying beautiful.  Take note of those plants and keep a record of them in your journal.  Next year plan carefully so that by late summer you anticipate what these plants will do for you in the fall and winter.  Make sure that you properly prune then id necessary.  Give them some fertilizer and keep them watered.  They will provide color in your garden when everything else is going into their winter rest.

In my garden, these are some of the plants that look decent right now:

Ivy geraniums are versatile plants.  They put on flowers profusely year round and are very hardy.  There are several varieties of this plant in the market so most likely you'll be able to find one that meets your choice of color.  The varieties come not only in varying flower colors but also the leaves come in all shades of green.  Some are glossy while others are not.  These plants are perfect for planters.  Keep them dead-headed, fertilized and watered.  Sometimes it is also necessary to prune them as the stems tend to get woody.  It is unlikely that you will kill this plant due to negligence; however, you will surely be rewarded with beautiful flowers and lush leaves if you tend to them. 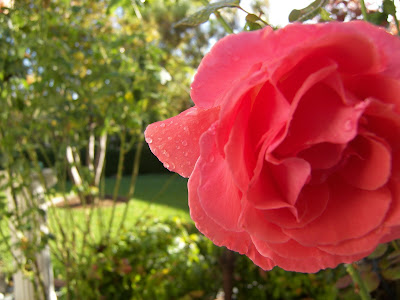 Roses are still blooming in my yard.  The internodes are getting longer than they used to due to reduced light intensity...that's why they are taller.  At this time, pruning is not advisable because it will encourage new stems or canes to come out.  New stems will not be hard enough to endure the winter temperatures.  For healthier roses in the spring, wait till after Christmas or later to prune. 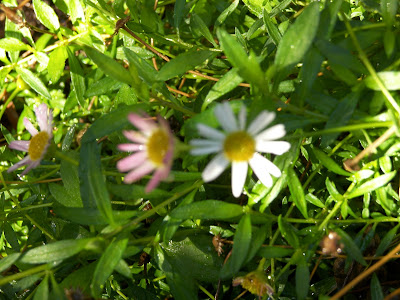 The Santa Barbara Daisy is one of the earliest flowers in the spring and one of the last flowers in the winter.  It has clusters of dainty flowers that complement a lot of other plants and they are also great by themselves.  This plant is great for planters and mixed borders.  It is a perennial plant and it reseeds it self.


Most of my plants are perennials.  If you like color in your garden during this time of the year, plant some annuals in early fall.

Posted by Helen Lewis at 8:55 PM No comments:

Truth: Plants produce their own food.

Plants are autothrops, which means they are self -feeding.   They produce their own food.  While humans and animals consume other living organisms to survive, plants photosynthesize.  Plants contain chlorophyll that allows them to capture solar energy needed to convert carbon dioxide and water into sugars, carbohydrates and proteins that are necessary food for all organisms.

If fertilizers are not plant food then what are they?

Availability of these elements in the soil depends on soil fertility, which is the inherent capacity of the soil to supply nutrients to plants in adequate amounts and suitable proportions.  The soil naturally contains all these elements but the condition of the soil determines whether such elements are in available or bound in form.  To give you very simple example, nitrogen can be present in the soil but when soil moisture is limiting, nitrogen cannot be absorbed by plants.  Then there is soil chemistry that determines how these elements are attached to each other. Soil acidity, better known as soil pH, plays an important role is the availability of a number of the micro nutrients in the soil.  When the availability of these elements is limited in the soil, fertilization becomes necessary.  Fertilization is the application of nutrient elements to the environment around a plant to meet its nutritional need.
Posted by Helen Lewis at 11:35 AM 1 comment:

Photoperiod is the duration of daylight during a given day.  Photoperiodism is the ability of any organism to detect and respond to changes in daylength.  In plants this phenomenon is expressed mostly in flowering.  Plants are classified into three categories depending on the number of hours of light they require before flower initiation.

Short-Day Plants - plants that flower only when the daylengths are less than 12 hours.
Common examples of short day plants are poinsettias, chrysanthemum, Christmas cactus, some varieties of strawberries.

Long-Day Plants - plants that flower only when the daylengths are longer than 12 hours.  Among the plants that fall under this classification are radishes, lettuce, spinach, potatoes, sedum, and beets.

Day-Neutral Plants - plants that do not have a particular response to varying daylength.  They flower regardless a long as the rest of the growing conditions are favorable.  Examples of day-neutral plants are tomato, corn, cucumber, and grapes.

To know the tendencies of the different horticultural crops is important in achieving desired results for the home gardener as well as the commercial grower.

My backyard observation of photoperiodism.
Last spring I planted cilantro and parsley.  During this period the daylengths were on the rise.  I observed that bolting occurred early on during the growth the plants.  For these plants which are grown particularly for their leaves, bolting or flowering is anti-productive.  Once flowering begins, growth is diverted to the reproductive parts of the plants and the vegetative growth ceases.  I tried to deter flowering by adding more nitrogen fertilizer but that did not work.

Early this fall, I planted another batch of cilantro and parsley, again.  The same cultural management was applied.  To my surprise, the plants continue to grow lots of leaves, and there is no sign of flowering at all.

With these observations, I can say that both cilantro and Italian parsley are long-day plants.  They will not flower until the days get longer than 12 hours.

Commercial Application of Photoperiodism
Photoperiod or daylength can be artificially altered in order to get a certain response from photoperiodic plants.  Poinsettias for example are short-day plants which require 14 hours of continuous darkness for at least one week before they begin to flower in which the leaves change colors.  Under natural conditions, this would happen only in late December.  Why then do we see bright colored poinsettias for sale even before Thanksgiving?  It is because all the poinsettias you see were grown in greenhouses where the lengths of days can be shortened by merely pushing a button.  For the plants in an artificially-lit greenhouse, turning off the lights means that the night has begun.

The cilantro and the parsley that we buy from the grocery store in the summer, on the other hand, are most likely grown in greenhouses where the dark period is long.  Remember, long-day plants flower when the days are long.  Herbs like cilantro and parsley are grown for their leaves.  One can trick these plants to keep producing, by artificially shortening the daylength.
Posted by Helen Lewis at 3:51 PM 1 comment: 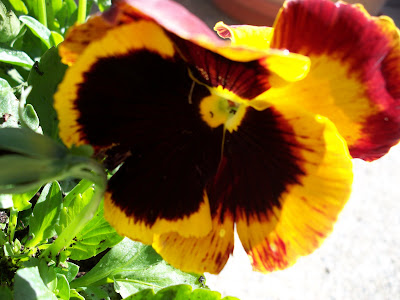 The old black color of this blog is now changed to a softer one.  I hope that the new color will be gentler to the eyes.  Have fun reading my blog and gardening afterwards.
Posted by Helen Lewis at 2:28 PM 1 comment:

Beneficial Elements are elements that help optimize the growth and development of plants but they are not essential for growth.  When they are absent in the soil, plants can still live a normal life.  Here are some criteria that separate beneficial element from the essential ones:

1. It can compensate for the toxic effects of other elements.

2.  May replace mineral nutrient in some other less specific function such as the maintenance of osmotic pressure.

3.  May be essential to some but not to all plants.


Examples of beneficial elements are:

Silicon increases the resistance of plants to pathogen and pests.  It also increases drought and heavy metal tolerance of plants.  Overall it improves the quality and yield of agricultural plants.

Cobalt (Co)
Cobalt is essential for the growth of Rhizobium bacteria for N fixation and thus beneficial for the plant.  Nitrogen fixation is the process by which the atmospheric molecular nitrogen (N2) is reduced to form ammonia (NH3).  This process is carried out by nitrogen-fixing bacteria which are found in the roots of most leguminous plants.  Ammonia is the form of nitrogen that is used by plants and other living systems in the synthesis of organic compounds.

Lithium (Li)
Affects transport of sugars from leaves to roots.  Production of food (carbohydrates and sugars) happens in the leaves during photosynthesis.  This food will be transported to the different parts of the plant such as the roots, fruits, new shoots, and stems.  Lithium enhances the transport of such food to the roots.

For the backyard gardener, there is no need to worry about artificially applying them to the soil or any growing media that you might use.  Your plants will still survive.  In case you want to insist, then the best thing for you to do is apply compost around your plants.

Beneficial elements are not essential for plant growth.  Lithium for example, is indirectly beneficial to the plant by its benefits to the bacteria rhizobium.  Plants don't need the bacteria for growth.  They need nitrogen.
Posted by Helen Lewis at 4:09 PM 1 comment:

There are seventeen elements known to be necessary for plants to complete their life cycle.  They are called essential elements.

Of the seventeen essential elements, hydrogen (H), oxygen (O), and carbon (C) come from the air and water and by nature, readily available.  Although nitrogen can also be found in the air, its gaseous form is not useable by plants.  Along with nitrogen, the rest of the elements are found in the soil.  Depending on the soil properties, however, some of these elements may be present but not in forms that are useable for plant use.   Still some soils may lack one or more of these elements.

When one or more of the essential elements is deficient, plants cannot complete their life cycle.  Such deficiency will be expressed in abnormal behavior in plant growth.  For this reason, fertilizers are used to supply the elements that are deficient within the growing area.

Scientists continue to evaluate the essentiality of more elements that are not included in the list.  Nickel for example, recently won the status of an essential trace or micro element.
Posted by Helen Lewis at 3:11 PM 1 comment: