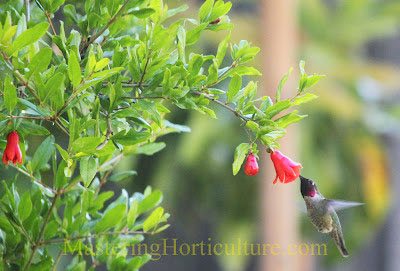 When I planted the pomegranate tree in my backyard there was only a thought of human food.  Little did I know that the hummingbirds also had some interest in the tree.   Now that the tree is in bloom, every morning, the birds dart like fighter jets around the tree, attacking each other in order to declare ownership of this luxurious resource.  Then the successful one gets to enjoy the nectar from the bright red flowers.

The fruit tree doubles as hummingbird attractant.  This makes the pomegranate a multitasker plant.. 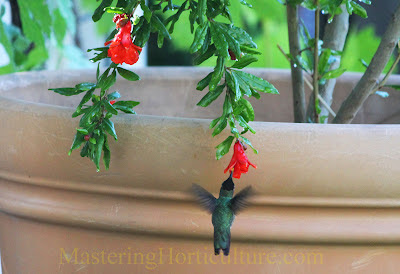 Plants that can multitask are always desirable.
Posted by Helen Lewis at 11:37 PM 1 comment: 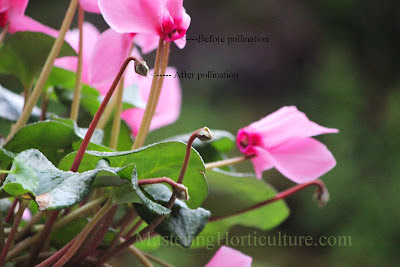 Fig. 1   Cyclamen flowers:  before and after pollination.

The cyclamen flower continues to amaze me.  In some of my previous blog posts, I described my observations on the movement of the petals (corolla) prior to fertilization and the eventual behavior of the seed head.  But the uniqueness of the plant has not ended there.  This beautiful plant is more mysterious than I originally thought. 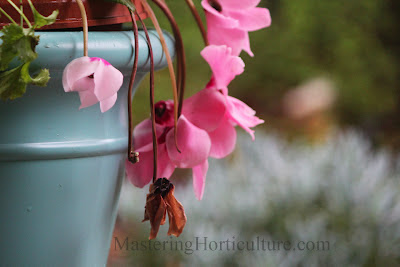 Corolla of unfertilized flowers remains attached to the peduncle.
It has been my recent observation that the corolla (petal) can fade away in two different manners depending on whether the flower is pollinated or not.  Firstly, flowers that have not been pollinated tend to senesce naturally while they remain attached to the peduncle.  The unpollinated flowers undergo a gradual decline of turgor resulting in wilting of the flowers (Fig.1).  This is then followed by a gradual discoloration of the corolla.  It is noteworthy that the corolla remains with the peduncle when pollination fails (Fig. 1).  The flower failed. 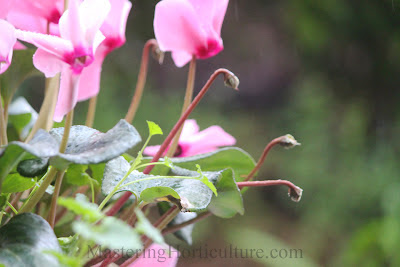 
Pollination results in corolla abscission
Secondly, flowers that have been pollinated shed off their corolla shortly after fertilization has taken place (Fig. 2).  In other words pollination results in corolla abscission.  (Abscission is simply the natural separation of any plant part from the main plant system)  It has been established through research that there is a significant increase in ethylene levels on pollinated flowers as compared to the unpollinated ones.  Combine this thought with the common knowledge that ethylene causes abscission among others and we get an explanation for the abcission of the corolla in fertilized flowers.  The flower whose goal was to attract pollinator now enters a new stage - to support the developing embryo.  At this point, the corolla or petal has accomplished its purpose and is no longer necessary - it falls off the flower cleanly.

My "almost-scientific" personal opinion
When flowers begin to lose the flow of fluids and sugars from the main plant (Fig. 1) then how can one expect further production of plant hormones, such as ethylene, from these parts anymore?  So the idea that ethylene is the cause of corolla abscission is kind of counter-intuitive.  There are evidences that show the role of ethylene in the development of the embryo.  The separation of the corolla could be an incidental occurence as the sepals begin to push downward to enclose the recently fertilized ovary (Fig. 4).  In contrast, the unfertilized flower that has already lost its turgor (Fig. 2) no longer have the force to do anything - such as push the corolla off the flowers. 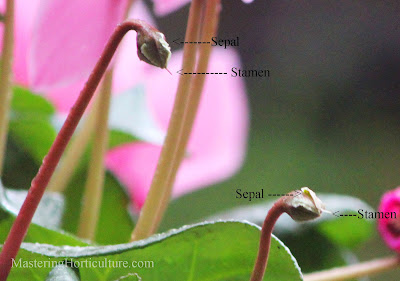 Fig. 4   The sepal enclosing the fertilized ovary after pollination.

Every plant has a set of unique behaviors which the gardener, given enough time, eventually comes to notice and appreciate.
Posted by Helen Lewis at 1:30 AM 2 comments: 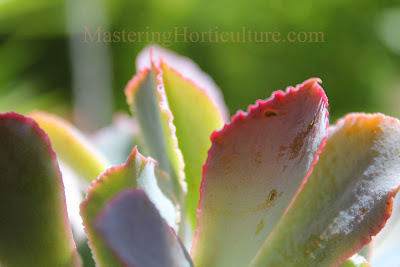 Echeveria hybrid 'Neon Breakers' has been added to my succulent collection this week.   It is a relatively new patented plant which is similar to but more robust than the unpatented commercially grown Echeveria shaviana 'Pink Frills'.  It is a beautiful plant with very marked red-colored ruffled leaf-margins.  It will be interesting to see how it performs in my garden..

'Neon Breakers' resulted from the breeding work of Renee O"Connell in 2005.

Email ThisBlogThis!Share to TwitterShare to FacebookShare to Pinterest
Labels: Succulents 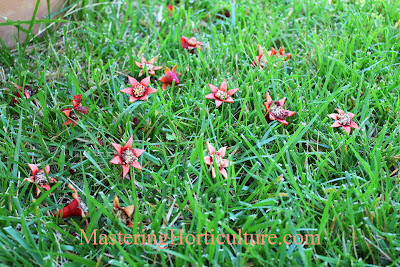 A star is a promise of illumination - like a flower is an early promise of a fruit to come. This season, my pomegranate tree (Punica granatum L. 'Wonderful') growing in a large pot is producing numerous bright colored flowers.  However, this week the flowers are dropping like falling stars (Fig. 1) at a very high rate.   The only factor that I can attribute this to is the sudden rise in temperature - from the 70s to high 90s (F). 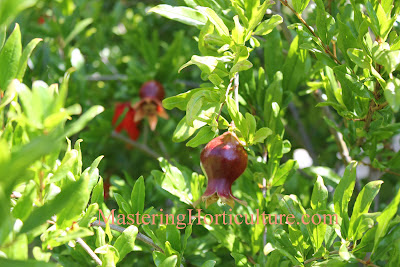 Temperature and humidity both play an important role in fruitfulness of orchard trees.  As a general rule, lower temperatures - without the frost - is most conducive to better flower initiation, successful pollination, and fruit set.  On the other hand, high temperatures (90+ degrees F) and low humidity can result in the abscission of flower buds and fruitlets (Fig. 1) - leading to unfruitfulness.  In our area, winter and early spring temperatures may be favorable but summer temperatures can be detrimental - hastening the deterioration of the embryo sac and the premature senescence of the ovules.

Based on last year's observations,  Pomegranate 'Wonderful' blooms continuously from spring to fall (Fig.3).  Some of the earlier flowers managed to set already (Fig. 2).  I am assuming that there are more fruits yet to set when the temperatures relent once more.  But we'll see...after all, this is only the second blooming year for this tree. 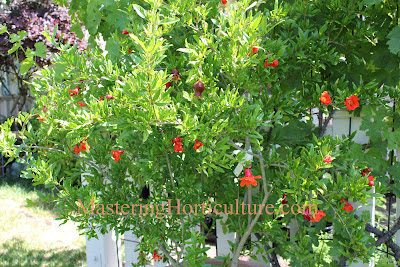 High temperatures inhibit fruit set in a number of plants.  The reason for this was demonstrated in a study on flower development and fruit set in apricot (Prunus armeniaca).  Results showed that warmer temperatures hastened that external development of flowers without significant advances in pistil development.  For fertilization to take place, the pollen and the pistil need to be synchronized.  Under warm temperatures the flower can unfurl its petals that attract pollinators but the ovules are immature.  I hate to use this analogy but it is like a girl acting like a grown-up prior to puberty.  In fruit trees, this situation does not end up in a successful fruit set.

Abscission of flowers and fruitlets is a natural mechanism for the plant to retain enough fruits that is equivalent to its capability to support under the existing environmental conditions. 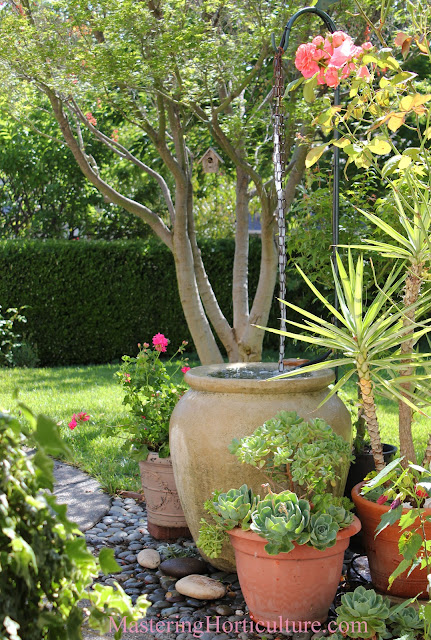 Last week my husband updated the fountain that runs the water in the old urn.  The design is inspired by a Japanese-style rain chain.  It is very simple and yet the sound and motion created by the water add so much to the calming effect of the garden especially on a hot summer day.


The sound of trickling water makes a garden seem peaceful and inviting.
Posted by Helen Lewis at 11:20 PM 2 comments: