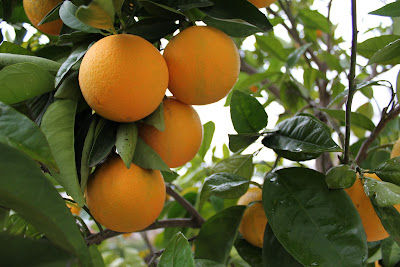 Fig. 1  Valencia Oranges in the winter.
While other plants are starting a new season of production, most citrus plants are at the end of a season.   When the garden looks bare and unproductive, the citrus plants remind us that their deciduous counterparts are just taking a break.  They give us a glimpse of summer in a time when the frigid temperatures seem to freeze all possibilites in the garden. 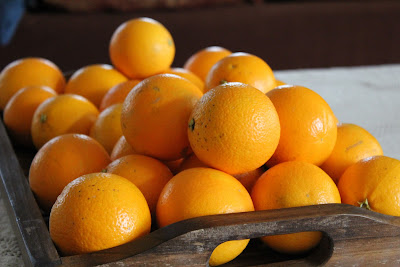 Fig. 2    First harvest:  Good eating quality, mildly tart, and medium-sized.
I have two 'Valencia' orange trees that are growing in large pots.  Currently, they are laden with ripe and juicy fruits.  Two weeks ago we harvested some of the fruits in preparation for the supposedly cold snow storm. We did not have the snow but at least the fruits (Fig. 2) got into the kitchen where they are now a regular part of our daily meals.   Soon I will have to harvest them all so that the plant can start another season to produce.

In my garden I also have a prolific 'Ponderosa' lemon tree where we harvest bags and bags of fruits every winter.   This year I also received a small 'Meyer' lemon tree in a five gallon pot as a present from my mother-in-law. 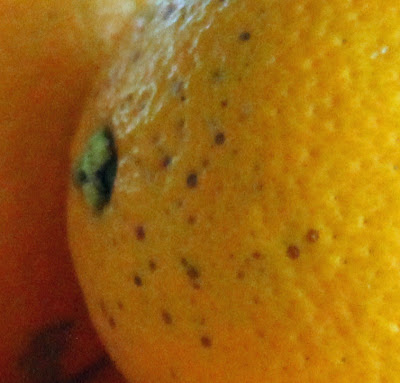 Fig. 3    Scale insects on orange fruits.
Last summer these trees were infested with scale insects.   Since the trees are of manageable sizes, I decided to mechanically remove the insects off the branches, patiently.  However, it was battle between me and the ants.   As I demolished colonies of scale insects, the ants literally relocated the "pioneer" scale insects into new territories.  No insecticide was applied.  Some of the branches were severely damaged that I cut them off during the growing season.  The ones that I missed are seen as leafless branches on Fig. 1.  I hoped to win the battle against my wingless enemies (scale insects) the humane or organic way but I lost!   I saw them on the fruits (Fig. 3).  Those black dots on the rind are scale insects.    Somehow, I fear that even after harvesting all of the fruits, some ants somewhere will protecting another "pioneer" to settle on the next spring leaves. 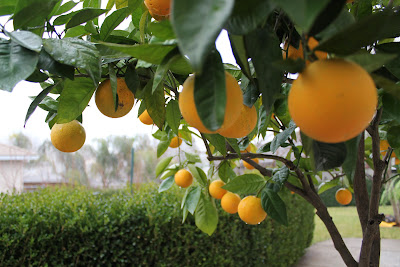 Fig. 4  Limited growing space require regular pruning of plant.
Soon, I will have to harvest ALL the fruits in order to relieve the tree from these demanding "sink".   In a plant the sink is the destination of synthesized food substances from the source which is the leaves.  In families, the young kids can be paralleled to a sink and the parents are the source. :)
The tree will need to be replenished with all the lost nutrients soon.  Fertilization is more important in potted plants than their in-ground counterparts since there is a limited hunting area for the roots.
Pruning will also be necessary to remove as much of the damaged branches as possible.   Since the trees also serve as ornamental plants, they will have to be trimmed and cut back to maintain a shape and size that is suitable for the limited space on that side of the yard (Fig. 4).
"A man ought to carry himself in the world as an orange tree would if it could walk up and down in the garden, swinging perfume from every little censer it holds up to the air."
~Henry Ward Beeher
Posted by Helen Lewis at 4:05 PM

Your orange tree is really beautiful. We cannot grow them here. I think I have the same problem with my sugar apple tree. Lots of black ants on some of the fruits.

I find it so much easier to grow fruit trees on the ground. You have done a great job with your potted oranges.

Ants on your tree is a sign that they are interested in something. It is possible that they are "farming" some tiny bugs. They eat the secretions from aphids and scale insects and so they protect them as much as they can.

I would plant my oranges in the ground if I have the space. :)

Your oranges look wonderful Helen. I only noticed the effects of the scale insects on the fruit when you mentioned it. Do you preserve your lemons? Or use them fresh?

Bom - We use the lemons both ways. Because we have so many of them, every year we set aside a time to juice them. We put the juice in freezer bags. Each bag contains two cups of juice which is enough to make a huge pitcher of lemonade - ready for the summer. Sometimes we also make lemon curds to put on scones and pancakes.

I'm sure that you can do the same with calamansi. When I was in the Philippines, I used to freeze calamansi juice in ice trays then transfer the juice-cubes in bags. I always like to put a cube in my pot of adobo. Here, I use lemon juice. :)

Helen, how wonderful to have a tree full of oranges even in a pot, and can just pluck them and pop in your mouth! So much information on those scale insects and ants on plants..Im always wondering why my plants got so many black ants!

Lemon in adobo? I should give that a try. It seems as fancy as using olive oil and balsamic vinegar for the adobo. :-D

I showed my wife your post and she is now bugging me to try my hand at lemons. She likes preserving them in salt and olive oil to use for chicken and fish dishes.

Beautiful Orange trees. In many ancient spiritual circles Orange-colored fruit (such as oranges, of course) were considered to be extremely healthy to the life force. I love oranges.

That's an impressive first harvest of oranges. I can't wait to add an orange tree here. Thus far we only have the Meyer Lemon planted. I hate citrus scale, and battled with it for the some time at our last house. I used to grow a Eureka lemon in a pot, that was endlessly affected. For some reason though, once planted in the garden, the scale (and most importantly the ants) disappeared! Have you tried wrapping the trunk and applying Tanglefoot to the tree? I found that helped. Keeping the ants away, so they can't protect the scale from their natural predators, really seems to help.

Hi Helen, in your reply to Bom i realized i am right for thinking that you are from here too. I thought you are in seeing your photo profile. You have lots of fruits from those oranges! We have some native varieties of oranges in Batangas, 6 trees, which gave us also lots of fruits. We sold most and gave a lot too. We were so happy too. Will the juice not become a bit bitter when preserved like that without any antioxidants?

What a lovely oranges! My dream is to have my garden filled with fruit trees, we just got our house and planted more than 10 fruit trees, we are just waiting for them to produce

Super Heavy Weight Tarpaulins are a versatile product that can be used in a variety of applications. Many individuals appreciate the advantages of these goods, which is why they are valued. Super Heavy Weight Tarpaulin is made of extra-thick materials to protect commodities and other objects from inclement weather such as storms and heavy rain. These come with brass eyelets and a 50-centimeter spacing gap on both sides of the tarp. They can be used in a variety of ways and for a variety of purposes. These are available in a wide range of materials and sizes. These are mostly used to hide things around the house and are used for a variety of home improvement goods. It's also utilized in the building business.