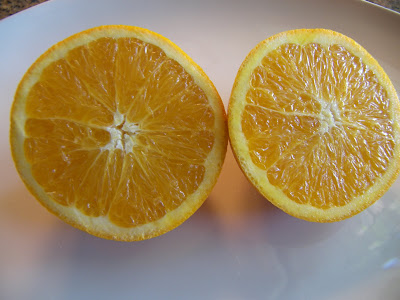 Par.theno.carpy
Origin: Greek word parthénos = maiden; karpos = fruit)
Literal meaning: virgin fruit
Botanical meaning: enlargement of the ovary into a fruit without fertilization.
(Parallel meaning: pregnancy without a developing-baby in the womb.)
Parthenocarpy is the phenomenon behind most seedless fruits.  Parthenocarpy is fruiting without the union of a male and a female egg cell.  The lack of fertilization means that there are no seeds in the fruit.  If there are seeds, they are not viable and are not capable of germinating.
Many times we take seedless fruits for granted and even despise the ones with seeds.  Although it is a natural occurrence in some varieties of some plant species (such as banana, persimmon, pineapple, and orange) parthenocarpy is an "abnormal" condition.   I say this because technically fruits are supposed to have seeds.  Seed is the reason for the fruit. 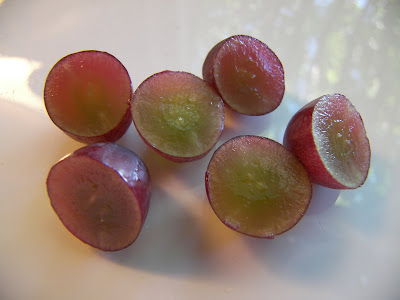 Seedless grapes with traces of undeveloped seeds.
Fruit development begins with pollination. The moment the right pollen grain touches the stigma (the sticky surface of the pistil), fireworks of events happen as if a switch button has just been set to ON.  First a pollen tube develops as a passage way for the sperm nuclei in the pollen to the reach the ovules (part of the flower that develops into a seed). As soon as the pollen reaches its destination fertilization occurs and a zygote (fertilized egg = seed) is developed. Then several hormonal changes happen to signal a succession of events that support a continued development of the zygote. Gibberellin level suddenly rises resulting in the enlargement of the tissue surrounding the ovary. This tissue eventually differentiates to form the fruit.  Fruits tissues come in different charactreristics:  fleshy (as in grapes, peaches and apples), hard (as in nuts) or dry (as in dandelions and grains).  In short, fruit development occurs when a seed starts to develop.

How does parthenocarpy happen?

1.  Uncompleted Seed (Aborted Embryo).  Pollination triggers fruit development but in some cases the embryo is aborted before successfully developing into a seed.   The landing of pollen on the stigma is enough to trigger fruit formation that continues regardless of failed seed development.  Seedlessness through parthenocarpy does not involve fertilization.  However, seedlessness can still happen even after fertilization has already occurred through stenospermocarpy.  In this mechanism, the embryo is aborted just the same but at a much later time (1). The 'Thompson' and 'Flame' seedless grapes are examples of stenospermocarpy; traces of undeveloped seeds are visible when the berries are opened (see picture above).

2.  Genetic Disorder (Chromosome Imbalance).  Plant species which are triploids cannot successfully produce seeds - they are genetically sterile. The banana we buy from the grocery store is parthenocarpic because it is a sterile triploid (two sets of chromosomes from one parent and one set from the other) instead of the normal diploid where you get one set of chromosomes from each parent.  Pollination happens but fertilization does not.  The tiny black dots inside the banana are traces of the unfertilized ovules.  In the case of seedless watermelon, triploidy is induced through genetic manipulation.

3.  Absence of a Perfect Mate (Self-Incompatibility).  Some plants species are self-incompatible - they are self sterile when pollinated by the same variety of plant.  In order to fruit, these species require pollens from a plant of different genetic makeup.  Navel oranges, pineapples, and clementines are examples of self -incompatible plants.  For example, when an orchard of the same variety of oranges is grown, fruits would come out seedless (parthenocarpic).

4.  Manipulation by Steroids (Application of Growth-Regulators).  There are several growth hormones that play a role in parthenocarpy but for the current topic, our focus will be gibberellin.  Gibberellin is a phytohormone (plant produced-hormone) that is also produced by certain fungus called Gibberella fujikuroi.  Through this fungus, gibberellin-like compounds known as gibberellic acid (GA) can be produced apart from the plant.  GA is known to promote cell division and enlargement; when applied to plant at a strategic time and rate, the plant will respond accordingly.  This knowledge regarding the response of plants to applied GA and the knowledge that endogenous (produced within) gibberellin levels in plants increase upon fertilization and thus triggering fruit development have changed the horticulture industry.  Flowers can now be fooled into thinking that fertilization has taken place and thereby developing fruit-tissues.  In other words, fruits can be induced with the application of gibberellic acid.

Parthenocarpy is a delightful abnormality because the seedless fruit maintains the appearance and taste of its normal counterpart.  This is the reason why growers have capitalized on it to improve the commercial value of some crops.  Research work continues to exploit the application of parthenocarpy on more plant species where the seed is not for consumption.

Muhammad--
Thanks. I was inspired to write this post because while I was talking to my 16-year old daughter about stuff I happened to have used the word 'parthenocarpic' to describe fruits. It occurred to me that it is an interesting topic even to a high school kid.

Hope all is well with your gardening and code writing. :)

A very interesting post. Is great knowing more about what happens in deep with plants.

Now I can say, "I hope my grapes have Parthenocarpy" Thanks for the new knowledge.

Hi Fer! Thanks for the visit here. I must say that some grape varieties are naturally parthenocarpic (or stenospermocarpic, try to say that)as a result of mutation or advances in breeding. If you desire to have seedless grapes then you must choose varieties that are already established as seedless such as the 'Seedless Thompson' and 'Flame'.
Have fun!

Today is the first time I found seeds in my cherry tomatoes. I was delighted to see them. Finally, something normal. But then again, there is only one tomato is this huge plant. There were many tomatoes in other plants but I couldn't find the seeds. Maybe they were extremely tiny and not visible. Thank you for sharing on Parthenocarpy.

Or use the seedless variety as a pollen (male) parent with a seeded parent acting as female. Then grow the seeds from the female plant and you'll get around 25% seedless offspring. Doesn't mean they'll be good though, so you select for the better ones.

Not all seedless fruits are perfectly seedless anyway. Most "seedless" grapes set soft seeds and can sometimes even ripen seeds enough that they are viable (like Venus seedless).
The seedless grapes in the supermarkets are the ones that are more reliably seedless.

Thanks for the article