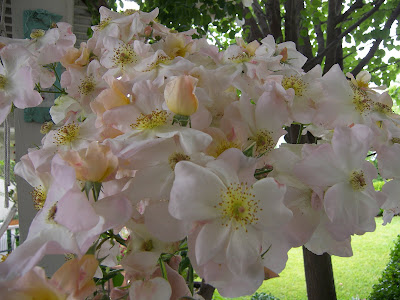 Rosa 'Sally Holmes'
As mentioned previously, my rose 'Sally Holmes' has gone over my 10-foot tall patio cover.  As a result it has been difficult to make a close-up appreciation of the massive bouquets that it produces.   Although I used to cut the wedding-bouquet-like flowers to delight my children with, it's been a long time since I had the chance to touch one.  Most of the time now the flowers are being ignored except for the constant reminders of their presence through showers of petals that are blown down by the afternoon breeze.
Well, recently the rose sent out new canes from the base of the plant.  It was amazing to see such flowers produced in an almost 1000-SPF-shade (meaning under a thick tree and the patio cover).   Compared to their sun-kissed counterparts sitting over the shade structure, these flowers exhibited a more pinkish-coloration - which I think is more beautiful.
'Sally Holmes', based on my observations, is tolerant to some shading.
Posted by Helen Lewis at 1:19 PM