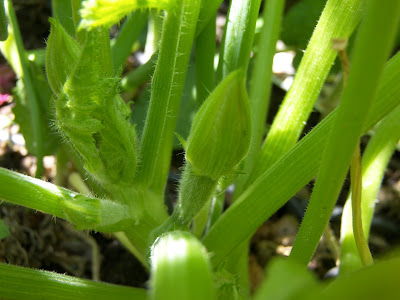 Unopened pistillate (female) flower.
There have been some zucchini flowers in my garden but no fruit has set so far.  When a baby zucchini appears, it is not a guarantee that a fruit will develop from it.  Sometimes this is a disappointing phenomenon especially to new gardeners. 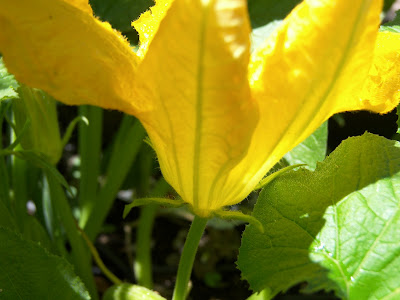 Staminate (male) flower.
Cucurbits have imperfect flowers.  Flowers are either perfect or imperfect.  Perfect flowers are those that include both pistil and stamen.  Imperfect flowers on the other hand, are those include either a stamen (staminate or male flower) or pistil  (pistillate or female flower) but not both.  Zucchini, just like all other cucurbita plants, bears imperfect flowers.
Then there are two kinds of plants with imperfect flowers:
1.  Dioecious plants are those that have either male or female flowers.  In this case there need to be two plants of different sexes for pollination to happen.  Examples of this type are holly (Ilex spp.), willow (Salix spp.) and poplar.
2.  Monoecious plants are those that carry the same sexes (pistillate and staminate flowers) in one individual plant.  Good examples of this type of plant are corn, and cucurbits (cucumber, pumpkin, squash, and gourds, etc).
Cucurbits are monoecious plants.  They bear both pistillate (female) and staminate (male) flowers on the same plant.  Pistillate flowers are those that have a miniature squash at the base although at this point it is still an unfertilized ovary.  The squash will develop only when the pistillate flower is fertilized or pollinated.
With the exception of the hybrid squash, cucurbita plants normally send out staminate flowers first.  When the plants are well developed they will be able to support multiple flowers - male and female flowers opening at overlapping intervals allowing pollination to take place.  Although the earlier flowers do not end up becoming fruits they are useful because they are like banners of invitation to the bees.  The colorful flowers invite the busy pollinators to come and stay around. 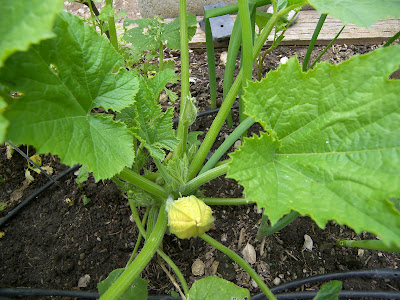 Zucchini: An example of a cucurbita plant.
Understanding the growth habits of plants helps us explain some of our successes and failures in growing them.
Posted by Helen Lewis at 11:55 PM