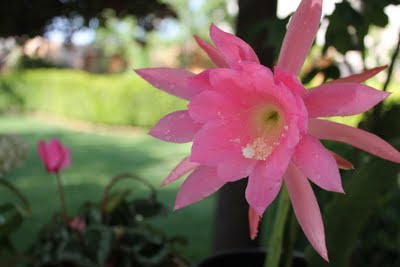 A year ago I received a box of flat broad succulent plant parts from one of my relatives living near Santa Barbara, California.  I did what I thought was right but I had little hope on their survival under the care of my amateur hands.  It was my first time to raise this type of plants. 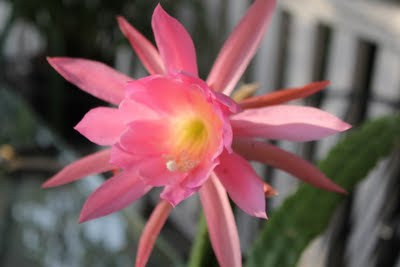 Flowers resemble the shape of a pinwheel.
Epiphyllums are known by many names: Epiphyllum phyllantus;Phyllocactus phyllantus; cactus orchids; Epi; Epiphyllum Hort; etc.   The accurate name is a highly debated topic among enthusiasts and scientists around the world.  However, until an internationally accepted name is published, I will use the name epiphyllum (lower-case e and un-italicized), which is the one adapted by the San Diego Epiphyllum Society. 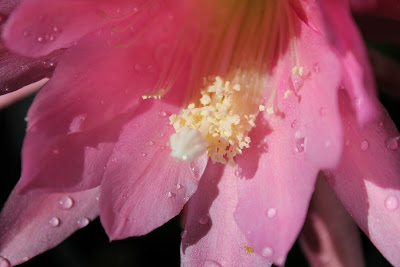 A close-up on the flowers:  White colored pistil and cream-colored stamens against the pink petals.
Some of my epiphyllums are now blooming and they look stunning.  The flowers were supposed to last only a day or so and longer in cooler temperatures.  Since our weather has been staying below sixty degrees F, I noticed that the pink flowers have remained more than a week while those with orange flowers remained for two weeks.  Fading of the flowers is signaled by the closing of flowers. Even when the flowers are closed their sharp colors remained.  I'm still waiting to see whether or not fruits will develop. 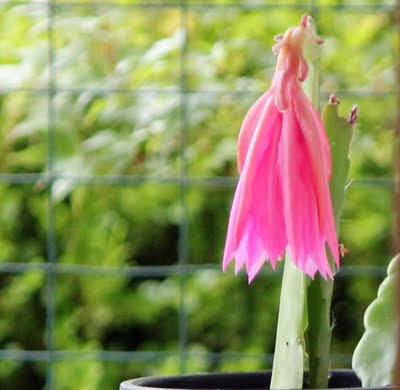 Spent flower droops down.
My next plan is to experiment on bringing some of them inside as houseplants.  In as much as they are shade-loving plants, the limited light indoors might be sufficient for them.  Furthermore, the stems do not change that much and there are no leaves that would wilt when I forget to water them. 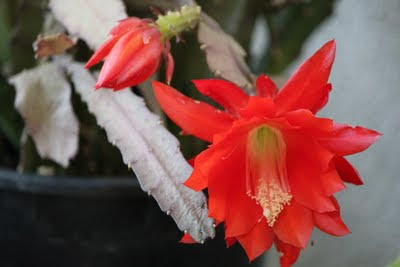 Orange-colored flowers.
Most of the epiphyllums we know today are hybrids from species that originated from the jungles of the Americas.
Posted by Helen Lewis at 10:51 PM

Hello Helen, i've been searching about epiphyllum, which i posted and challenged me too much because of the varied comments i got. You know i post on impulse without search, and now am intrigued by this flower, which i really dont know anything about. I encountered the ESA and now your SDES, learned that 'vase life' or time before drying depends on variety. First i thought all of them dehisce the night they opened! Now i am so interested planting them in theproperty in the province. What do you think triggers it to flower? A ref said it has dormancy, so maybe i can force it to flower here. Unfortunately, my cousin-neighbor only has one plant, and i will just get the stem to plant when i go home, haha!

Your varieties are beautiful and flower even not so big plant yet. Did you plant them in soil. Ours is in the soil but i read it is an epiphyte. I know it is easier to learn from you because we have the same background. Thank you so much.