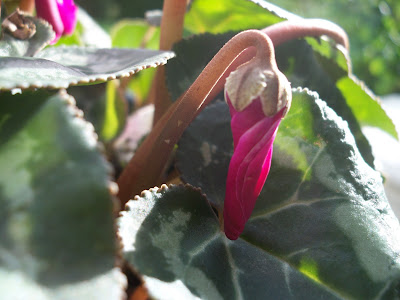 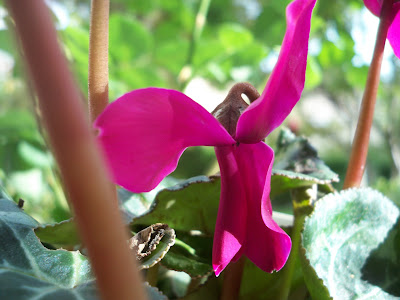 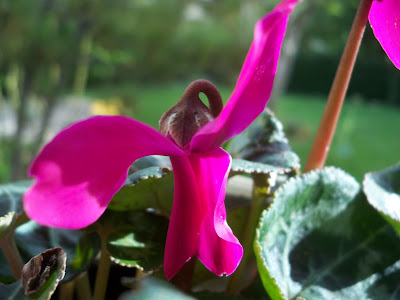 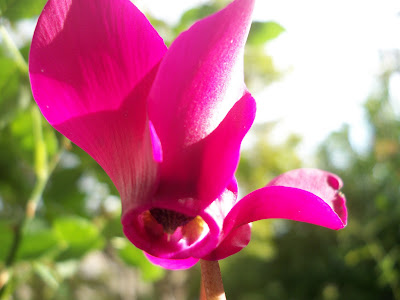 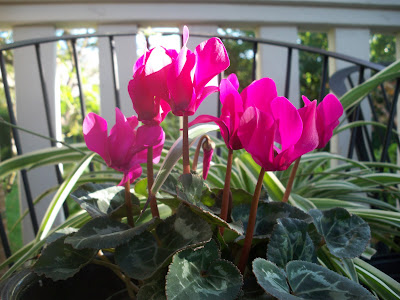 There's always something new to learn from the garden and cyclamen is indeed an interesting flower!
What's happening in your garden today?
Posted by Helen Lewis at 4:34 PM

This is so interesting, Helen. I wonder if this is available locally. My daughter will surely enjoy the relex action of the petals. Thank you for the new information.

Beautiful flower! I like the relaxed attitude it takes.
It is indeed a very interesting plant, thanks for all the new information. I would like to see it in person too.

Once again you provide wonderful detail into the mysteries of plants. In some areas where I live (Canada)you can grow these outdoors, but mostly they are grown in pots.

Hi Helen, this is my first visit to your blog and i love it already. So interesting to learn about the science as well as appreciate the beauty of plants. Like Patty, here (Melbourne, Australia) cyclamens are big in pots. But I love the tiny ones you sometimes see in gardens. I did try them once but they failed to thrive. cheers, catmint

Very interesting post! I love how you captured the various stages of the flower opening.

Lovely post. I like how you photographed the petals opening. I think Cyclamen are such a wonderful addition to the winter months. And I love how their petals turn upwards. Like there is a big fan on their faces and they are windblown!

Thanks everyone for visiting my blog and thank you for all the comments you left. This is my first time to be online since posting "Cyclamen". I was out of Internet coverage for more than a week so I apologize for the lack of response from me. I'll explain myself in detail later when I can get access to a real keyboard- I'm using an iPhone and my fingers seem too big to type accurately. :)

most interesting and good photos too..thank you..

oh goodness! i just bought one of these and couldn't figure out what it was called, but what a beauty this flower actually is!!!

Clear tarpaulins are ideal for tasks that require a high level of light infiltration. Clear Tarpaulins include 50cm of spacing between metal eyelets on all four sides, as well as PVC reinforced hems. These are used to hold and collect debris during painting as well as during building construction. These heavy-duty tarps are ideal for jobs that demand maximum light transmission.