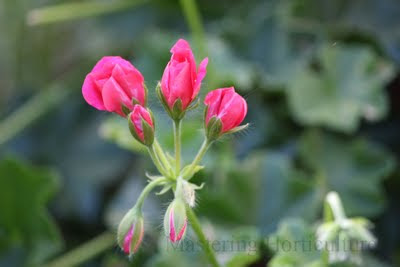 Ivy geranium (Pelargonium peltatum)
At this time of the year, when summer is about to give in to autumn, ivy geranium (Pelargonium peltatum) is one of the last plants with vibrant flowers in my garden.  Geraniums are attractive, very easy to care for, and a container-gem.  There are a few things to consider when growing ivy geraniums:
1. Water moderately.  Watering once or twice a week is sufficient.  Too much water can cause the tissues to burst and die resulting in the appearance of corky brown spots of the semi-succulent leaves.  This case is called edema.  The plant takes up more water than it can release through transpiration.  Unlike some plants such as grasses that can push the water out through specialized openings on the leaves (called hydathodes), ivy geranium succumb to breakage of its 'bloated' tissues.
2.  Fertilize moderately.  It has been my observation that small amounts of soluble complete fertilizer can be added every two weeks during watering.  Under this climatic region, ivy geranium remains green throughout the year but I stop fertilizing in late fall to force my plants to go into pseudo-dormancy in preparation for a bigger show in early spring.
3.  Balance sunlight against temperature.  Ivy geraniums are sun-loving plants and yet they also enjoy moderate temperatures.  The optimum number of hours of sunlight depends on the prevailing climatic condition. I have noticed that ivy geranium bloom happily in hanging baskets along the streets of London, Toronto, San Francisco, and Seattle where they get sunlight all day.  Climate in these cities are generally mild as influenced by the coastal breeze.  On the contrary, in places (like mine) where summers are very hot and dry, some afternoon shade benefits the ivy geraniums a tremendously.
4.  Prune regularly.  Maintain the size and shape of ivy geraniums by pruning regularly. Freshen up the plants by removing old and woody stems.   This will encourage the growth of more branches and thus more flowers.  Spent flowers fall off naturally after a while.  However, if you are someone with Type A personality - by all means, dead-head.
Posted by Helen Lewis at 5:28 PM

Would they grow indoors over here, do you think?

I have several of them growing on the deck right now and I am hoping to bring them in for the winter and winter them over indoors so I can put them out again in spring. I do this all the time with Nova geraniums but never tried it with pelargoniums. (We are in New England so I will bring them in shortly, before the first frost.)

Just wondering, how best to give them an adequate period of dormancy in this setting.

Bom --
I have seen ivy geranium treated as a houseplant. They do fine indoors especially when they are located next to a sunny window. The problem is that the nodes get long when light is not sufficient -hence fewer branches and flowers. :)

Hi Kathy and Steve --
When it comes to encouraging ivy geranium to go into dormancy, the best way is to go "bare roots". Dig out the plants from the pots, carefully remove the soil around their roots then place them inside paper bags. While in the bags, keep them in your basement or garage where they are protected from freezing temperatures. Make sure to visit them once a month to hydrate them by soaking the roots in water for a couple of hours. The plants will be dormant this way. :)

We are giving it a try! Thanks for the guidance!