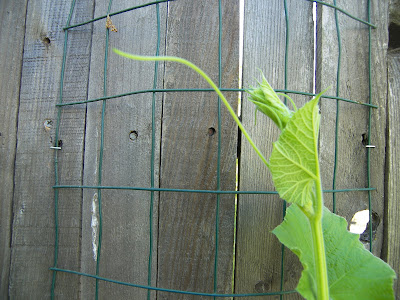 Aided by the air movement this tendril will soon touch the wire.
I have been closely monitoring the growth and behavior of the two bottle gourds (Lagenaria siceraria) plants in my garden because I'm curious as to how they would behave in this climate.  Although my growing-up years involved eating its fruits and playing under the shade of its broad leaves on overhead-trellises so far I have not grown it in my California garden.   Now I get to appreciate those plant characteristics that I took for granted in my younger days.
Tendril is one of the special features of this plant that I came to appreciate.  Technically speaking, tendril is a modified plant organ.  Everyone knows that the basic plant has roots, stems, leaves, branches, fruits and flowers.  Depending on the nature or original habitat of the plant, one or more of these basic plant organs take on a modified form.  The bottle gourd is a plant of the tropics where the vegetation is dense that plants continually fight for a favorable position in relation to available sunlight.  Some plants which are not structurally equipped to stand tall have developed tendrils for support.  This is called adaptation.  One fictional example of this phenomenon is demonstrated in the movie "Waterworld" where Mariner (played by Kevin Costner) developed gills because his world was the water. 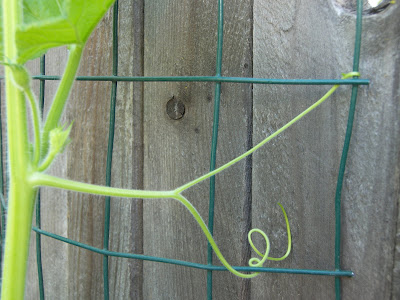 Branched tendrils coil around slender wire...
The tendril is sensitive to contact - this is called thigmotropism.  Any solid object that comes in contact the tendril serves as a stimulus to the direction of its growth.  Tendrils tend to consistently follow a clockwise or counterclockwise direction.
The tendril of the bottle gourd (a cucurbita) could be a modified shoot.   It grows from the node where a leaf, flower and another branch normally appear.  The tendril being a shoot eventually breaks into lateral branches as demonstrated by more than one tendril coming one original growth from the node. 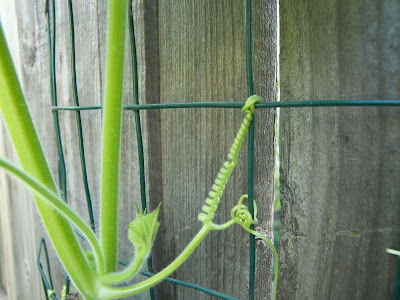 The tendril contracts spirally to strengthen its grip... 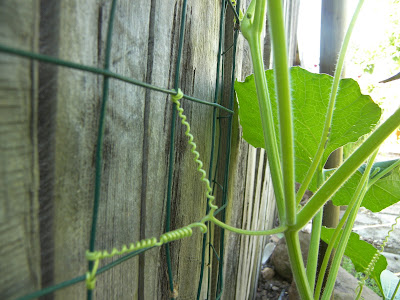 The springy tendrils brace the plant close to the solid support.
Have you any plants with tendrils growing in your garden?
Posted by Helen Lewis at 10:55 PM

I'm a Brazilian botanist and I would like to use one of your amazing pics of Lagenaria siceraria in a scientific publication I'm preparing. Is it ok to use it? If yes, would it be enough to give you credit by adding ©H. Lewis on the picture?

Thanks in advance.
Kind regards,

Mariane Sousa-Baena -- Thank you for your interest in my tendril picture and for asking permission to use it. Sorry that I replied very late. Yeah that works but I would prefer to have a link to Mastering Horticulture.

Is it possible to have a copy of your article once it is published? I would really appreciate that.