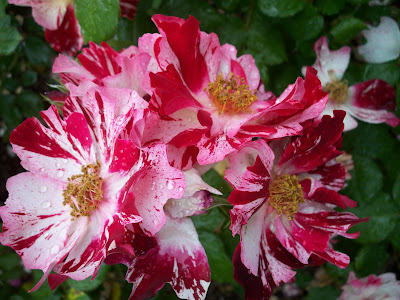 Rosa 'Fourth Of July'
(Parentage:  Rosa 'Roller Coaster' x Rosa 'Altissimo')
Happy Fourth of July everyone!  My family just got back from watching the fireworks at the El Dorado Hills Town Center to celebrate the declaration of independence of this country from Britain.  It was then when democracy was born.  In July 4, 1776 the American flag, known as the red-white-and-blue, flew alone.
Rosa 'Fourth Of July'.  There is a rose named after this eventful day because of its explosion of red/white color.   The flowers are composed of 15-petals with fruity fragrance.  The leaves are glossy dark green that are quite resistant to diseases. This climbing rose was winner of the coveted ARRS award in 1999.
'Fourth Of July' in my garden.  Although this rose is climbing in nature, the one in my garden is a standard rose - it looks like a tree because of the way it was grafted.  It did very well in full sun but I moved it last year in order to open up a space in the grass area.   Now this rose grows along the southern fence where it gets a lot of the afternoon sun.  It is doing considerably fine but not as vigorous as when it was getting both morning and afternoon sun.  It could also be that it is just taking some time to get re-established in this new place. 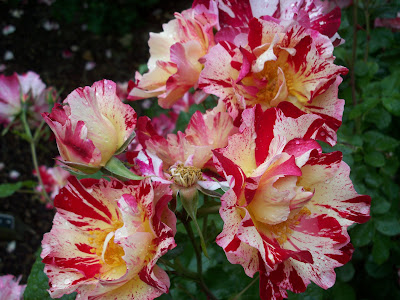 What beautiful flowers. I'm not sure they would grow in Texas, but the artist in me would love to paint them!