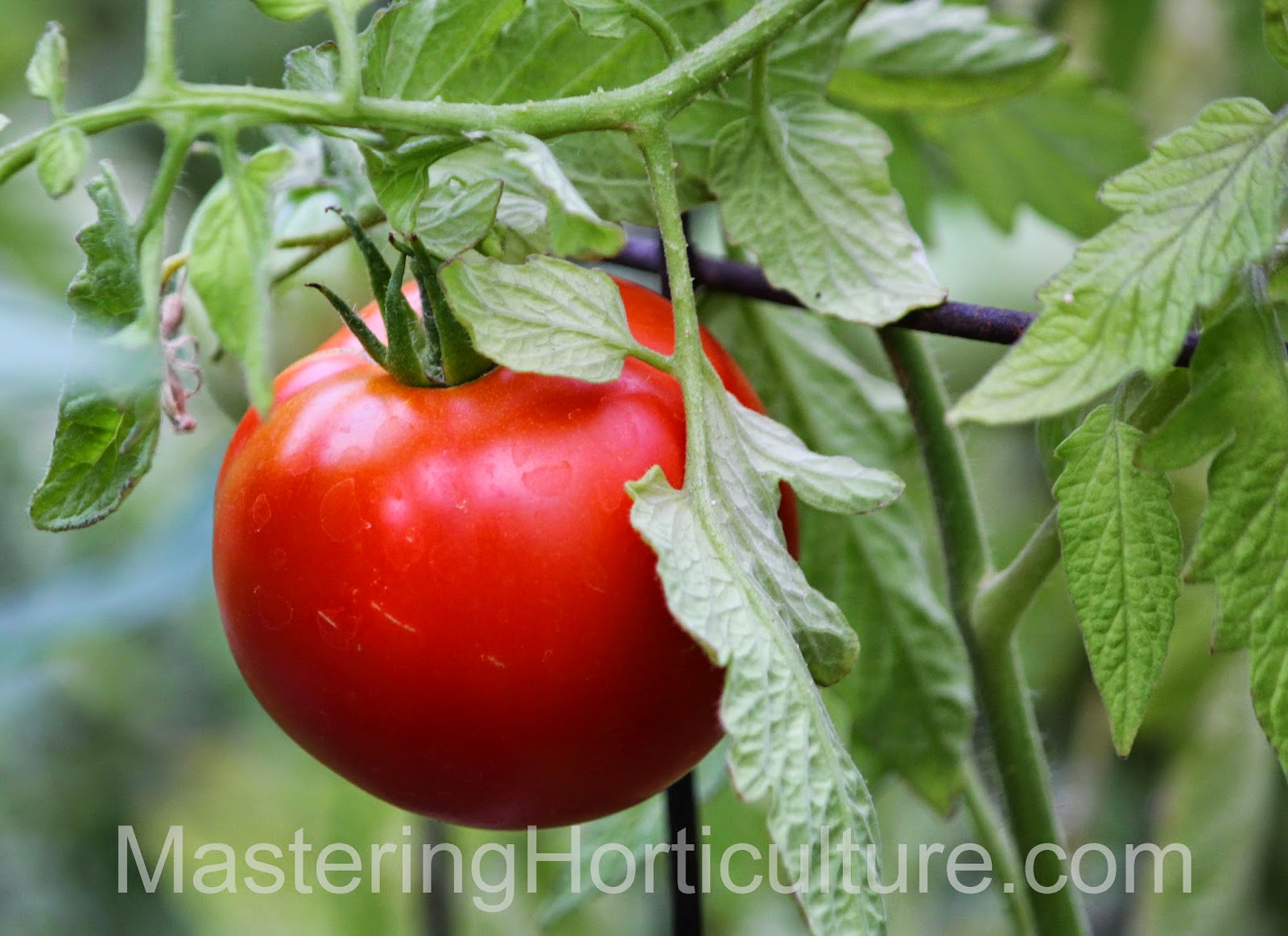 Tomato is one of the favorite vegetables in our home. Every year, we grow different vegetables.  Since we moved to this area (fifteen years ago) I cannot remember a single summer when tomatoes were not grown in this garden.  I can remember a time when my second daughter was just three and I found her in the garden her mouth bleeding and blood dripping all over her white shirt.  Or so I thought.  But to my relief, I also found tomato seeds with the red fluid oozing from her mouth. She has been in the tomato path where she ate, who knows how many, cherry tomatoes straight from the plants.  :)

As the summer draws to an end and the summer vegetable garden begins to fade, I thought I’d look back.  Everyone knows how to grow tomatoes but there are things each gardener learns through experience.  For the record, here is a list of some of the useful lessons I learned. 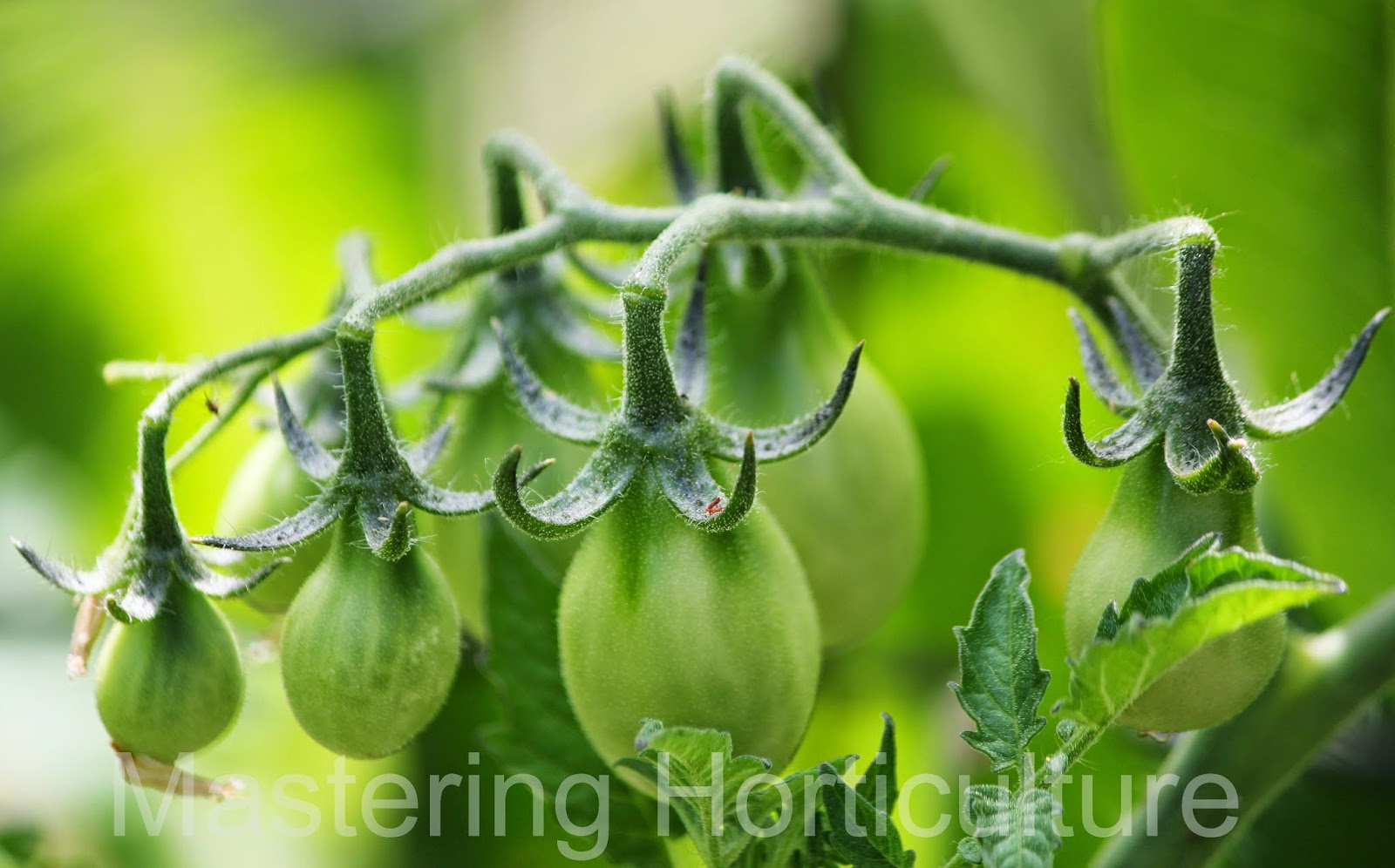 Optimum temperatures for tomato fruit setting are between 70 and 85 degrees F.

Lesson 1.  Plant early in the season – protect them if you need to.
As early as March, when other gardeners were still anticipating more frosty nights, we planted tomatoes. As a result, we enjoyed eating our own home-grown tomato salad early in the season. There is a small window in the temperature range when tomato blossoms set - and the optimum day temperature range being 70-85 degrees F. When night temperatures are cool (consistently below 55 degrees) or when day temperatures are hot (day temperatures of 95 degrees with night time temperatures of consistently above 75 degrees), fruit setting is jeopardized. Planting early prepares tomatoes for fruit setting prior to the occurrence of optimum temperatures during that season. The plant should be blooming by the time temperatures are right because this part of the country (Zone 9) heats up within a short period of time. There is nothing worse than having tomato plants that are beginning to bloom in the dead of summer. No amount of blossom spray will correct the effects of our area's intense summer temperature.

Consumption and utilization of produce is the ultimate measure of success in vegetable gardening.

Lesson 2.   Stagger planting of similar maturity-date varieties.
This is especially important when planting determinate varieties which yield one heavy crop on a short period of time.   Planting tomato successively at two-week- interval provides a progression of harvest rather than an overwhelming amount of harvest at one time. It prolongs harvest period and makes canning even more manageable. 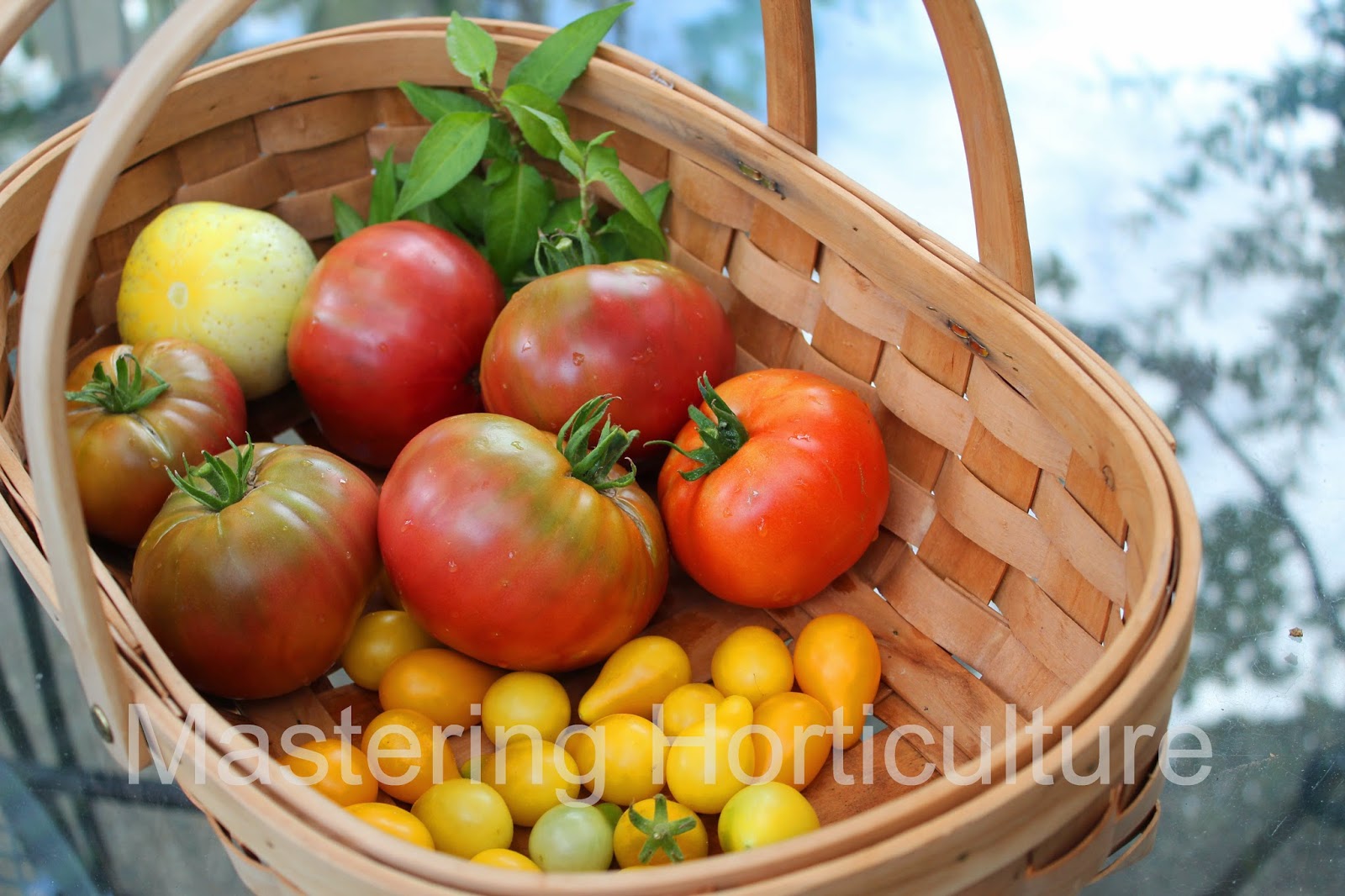 The soil is like a plant nanny that holds food and water for the plant.

Lesson 3.   Recondition old soil.
Continuously planted soils get depleted over time. Between the amount plants take up and amount water carries through run off and percolation, available nutrients in the soil can rapidly diminish. This is a mistake I had overlooked this year. Just because, my garden produced vigorous plants in the past, I took the soil condition for granted - a critical part of the garden was neglected.  Therefore, by the end of this year, I plan to cover the area with chicken manure and leaves that will fall from healthy deciduous trees. Then add a small amount of complete organic fertilizer.  This recipe will encourage microorganisms and earthworms to do their job on boosting the condition of the soil.


Tomatoes stop being productive under extremely hot and dry conditions.

Lesson 4.   Plant Tomatoes where they get late afternoon shade.
While tomatoes are a summer crop, they reach optimum production at relatively low temperatures.  When temperatures are high, the stomata close and thus halt production (photosynthesis).  In this part of the country (Zone 9) temperatures get in the high nineties up to over 100 degrees.  It is a good idea to position the tomatoes in an area where they get a relief from the intensity of the summer's afternoon sun.  Not only does the production rate is reduced, problems such as scalding, blossom-end-rot, and leaf curling become a problem. Some gardeners provide shade for the tomatoes during the late afternoon to reduce stress from high temperatures, water deficit and high radiation. 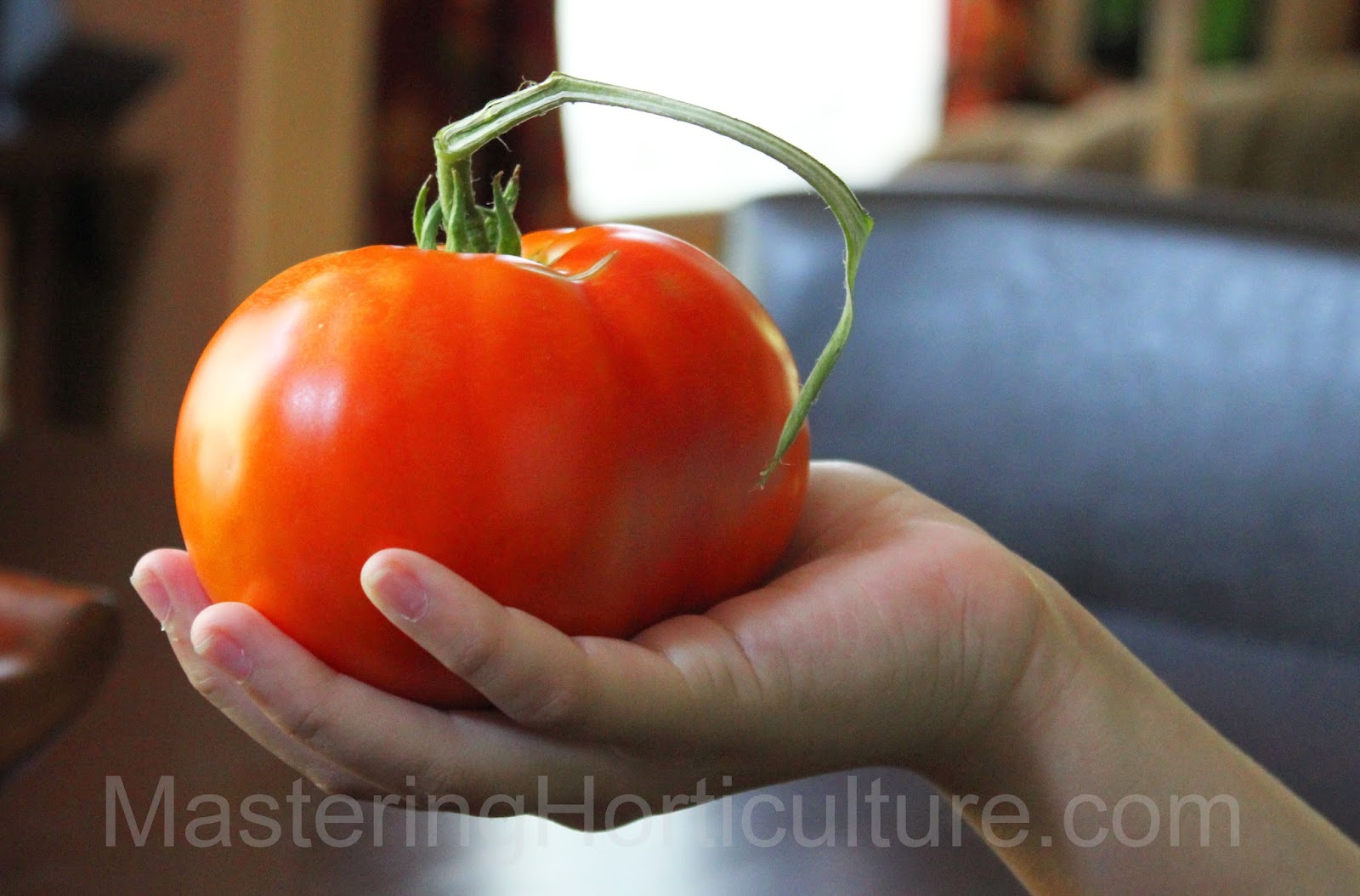 Lesson  5.  Attract Blue Jays to the garden to eliminate problems with tomato/tobacco hornworm.
When it comes to finding the most devastating caterpillars in the tomato garden, blue jays are the best.  It is good to encourage them to linger in the garden.  Set out some large-seed bird food such as corn and peanuts in the garden and provide a source of water for them such as a simple bird bath.   In my garden, the promise of fruits from the grapes, pears, apples and plums lure the jays as well as the mocking birds (both are great hunters of caterpillars) to stay around.  It’s been years since we had problems with tobacco hornworm.

Posted by Helen Lewis at 5:14 PM No comments: 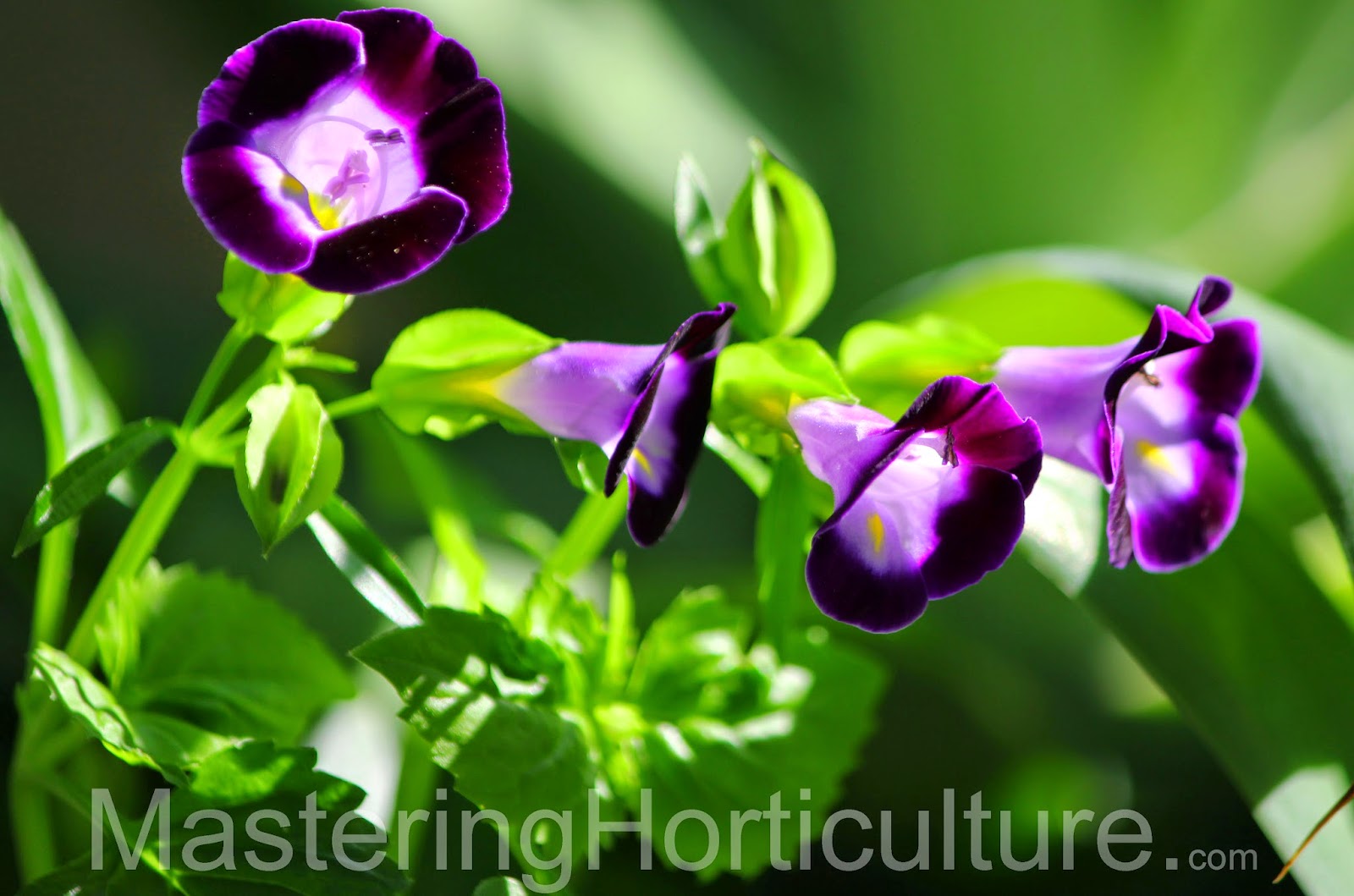 Every year I try one or two new plants in my garden and this year one of them is Torenia (Torenia fournieri). Torenia, commonly called 'Wishbone flower' is a beautiful annual plant that performs best in the shade. The tubular flowers come in shades of pink, yellow, and blue on the lobes - depending on variety. The tube often comes in white with a blotch of yellow in the interior of the lower lobe (Fig. 1). The plant grows up to 12 inches tall and wide and blooms continuously in summer until temperatures drop to freezing point. 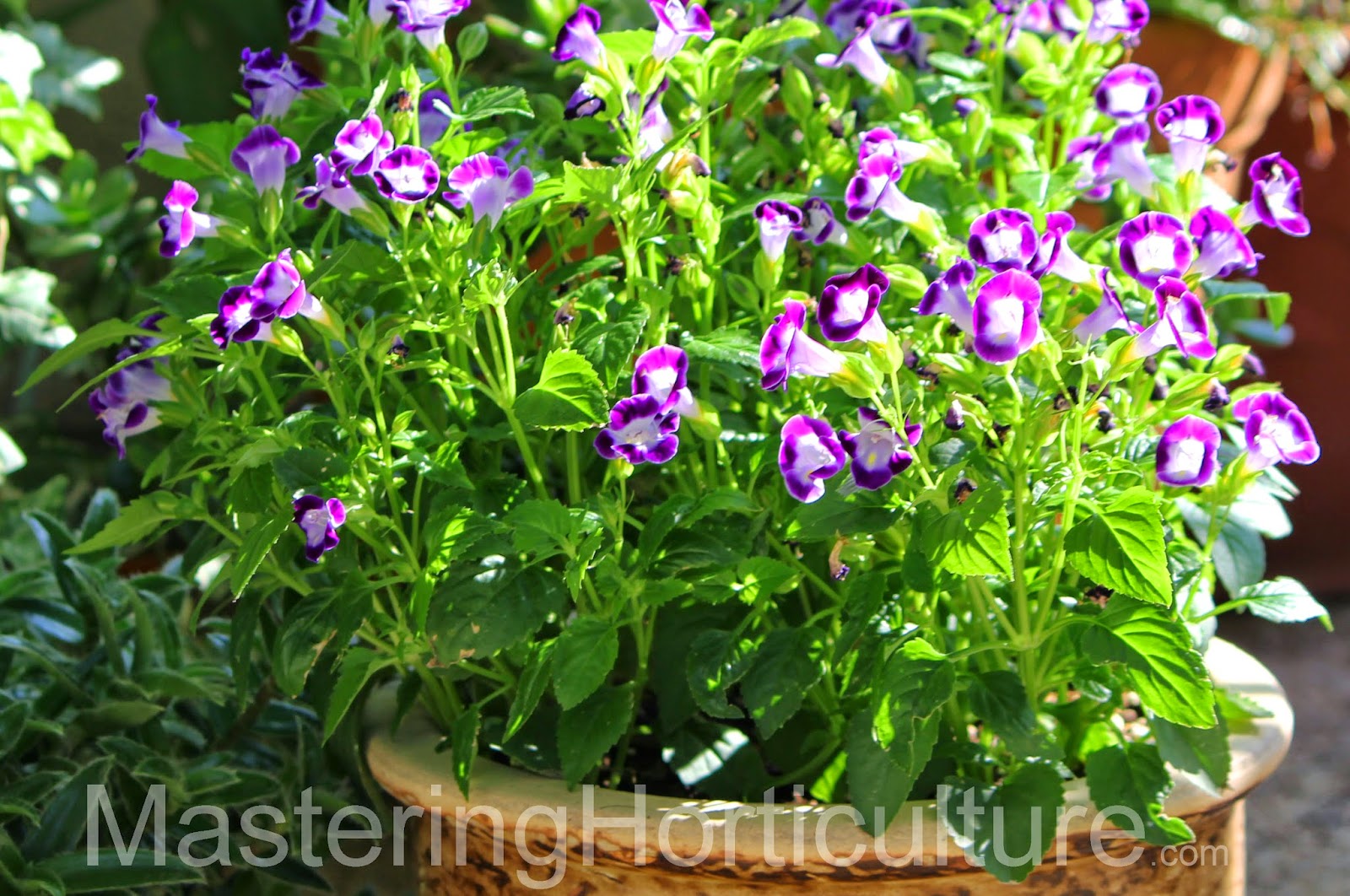 Torenia is generally easy to care for.   For best results, plant it in the shade and where the soil is fertile.  Keep the soil moist especially in hotter weather condition.  Pinch young plants to induce branching for a more bushy appearance of the plant.  Fertilize regularly with complete fertilizer to promote profuse blooming. When growing torenia in containers, put container-plants together to create a shadier and cooler environment (Fig. 3).

There are no known serious insect and disease problems but they could be susceptible to powdery mildew and possibly root rot - depending on soil.

Torenia is giving me a positive first impression.  So far, it will continue to have a place in my garden as an annual plant (replacing impatiens) until I find a better one. 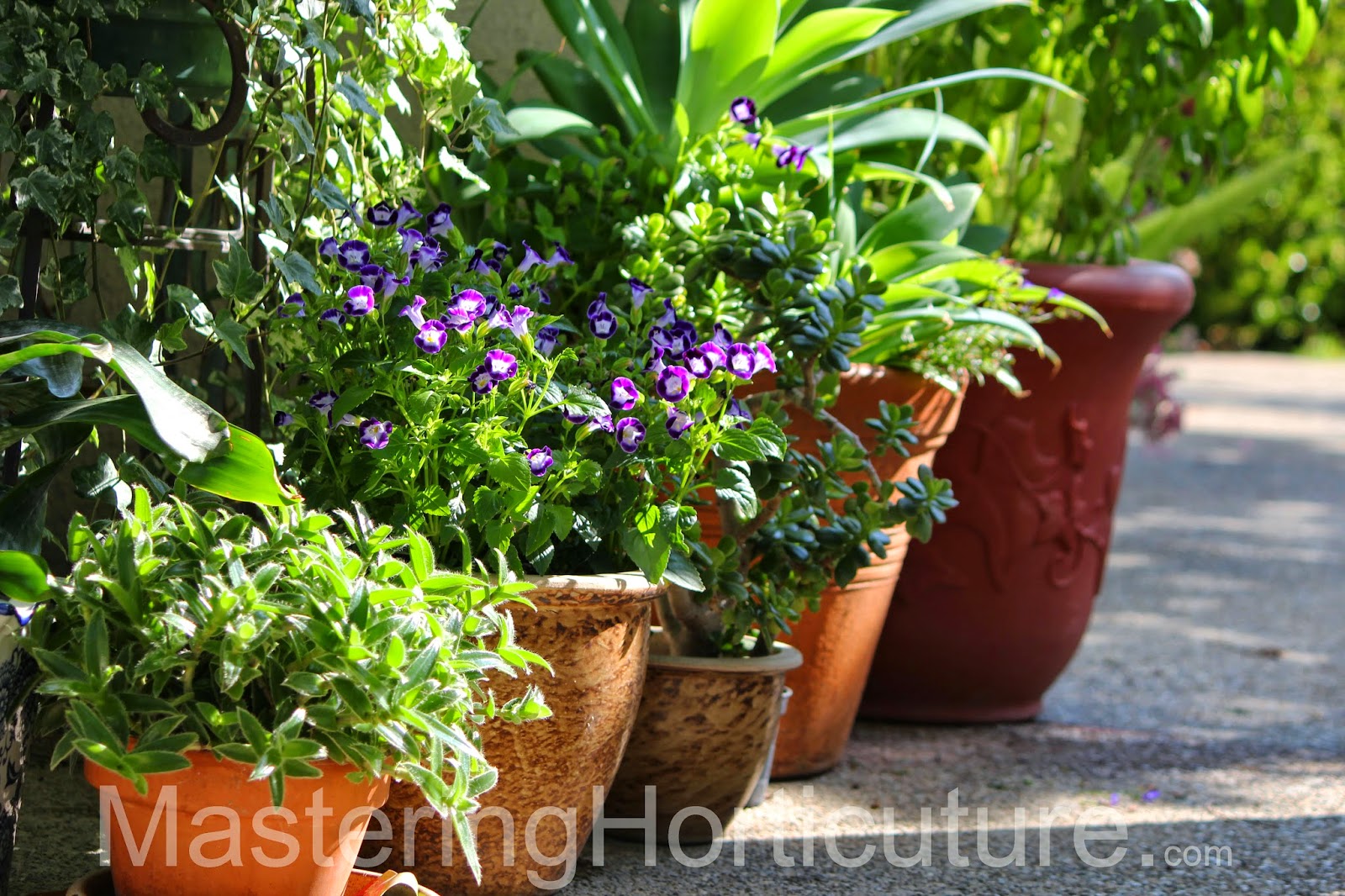 Try new plants in your garden - just for fun!

Posted by Helen Lewis at 2:24 PM No comments: 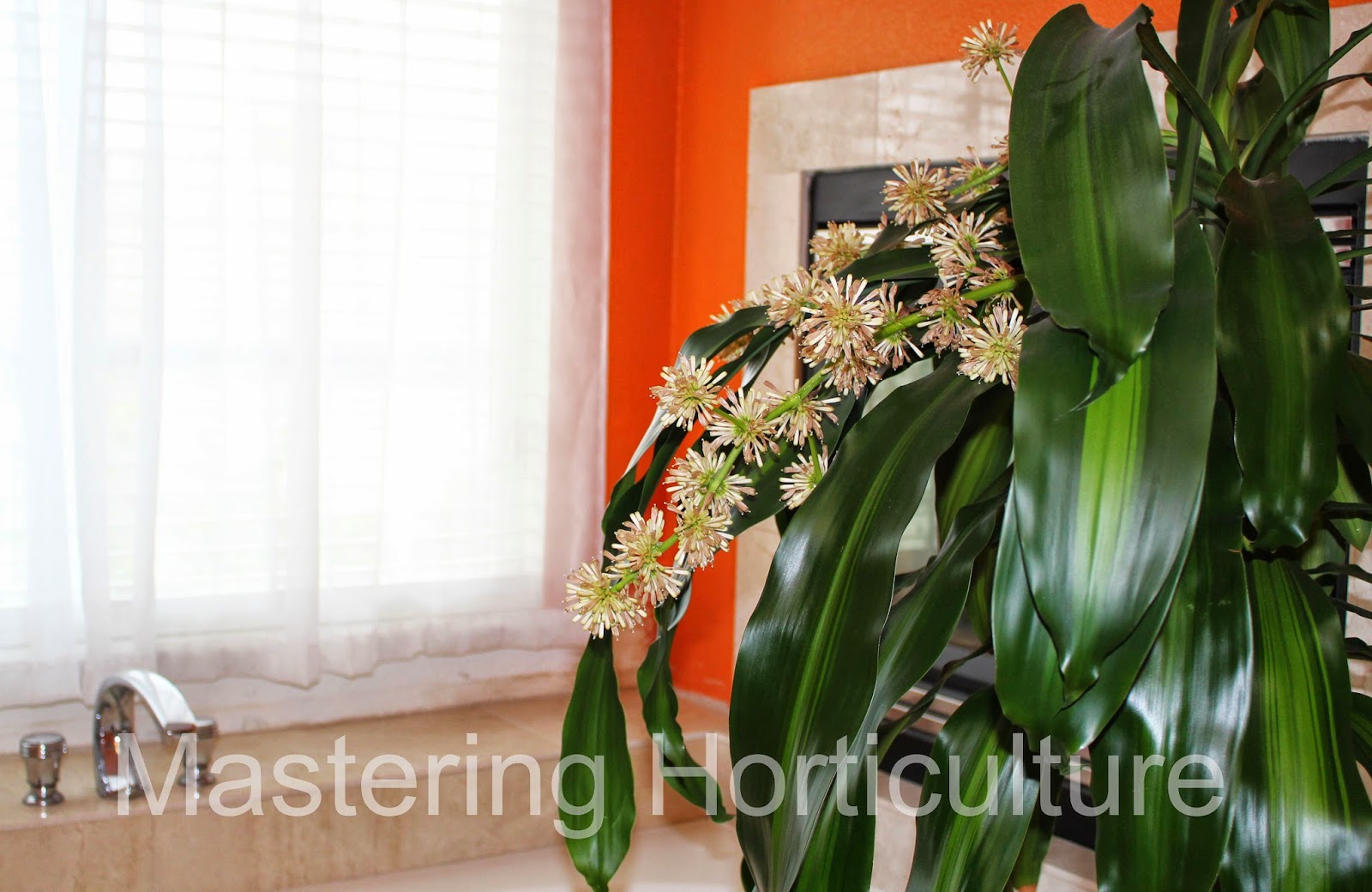 Dracaena fragrans is one of the most important houseplants in the United States because of its ability to tolerate low-light environments and low maintenance.  In the Philippines, it is grown both as an indoor or outdoor plant.

This plant is known by so many names and for different reasons. With its broad and elongated leaves that resemble that of corn (Zea maize), Dracaena fragrans is nick-named corn plant or cornstalk plant in this part of the world.  On the other hand, its botanical name indicates a significant olfactory characteristic - "fragrans".  This plant's ability to exude sweet odor outweighs all other characteristics that it is used to universally describe the species of the plant.  With such names we could say that this type of dracaena is a fragrant corn-looking plant.  However, in some countries it is called 'Fortune Plant'. There is a superstition that revolves not just in the Philippines but in the rest of Asia.  If the plant blooms in your care, then good fortunes will abound in the home.  The blooming time seems to be unpredictable that people associate it with the elusive incidence of good luck. :) 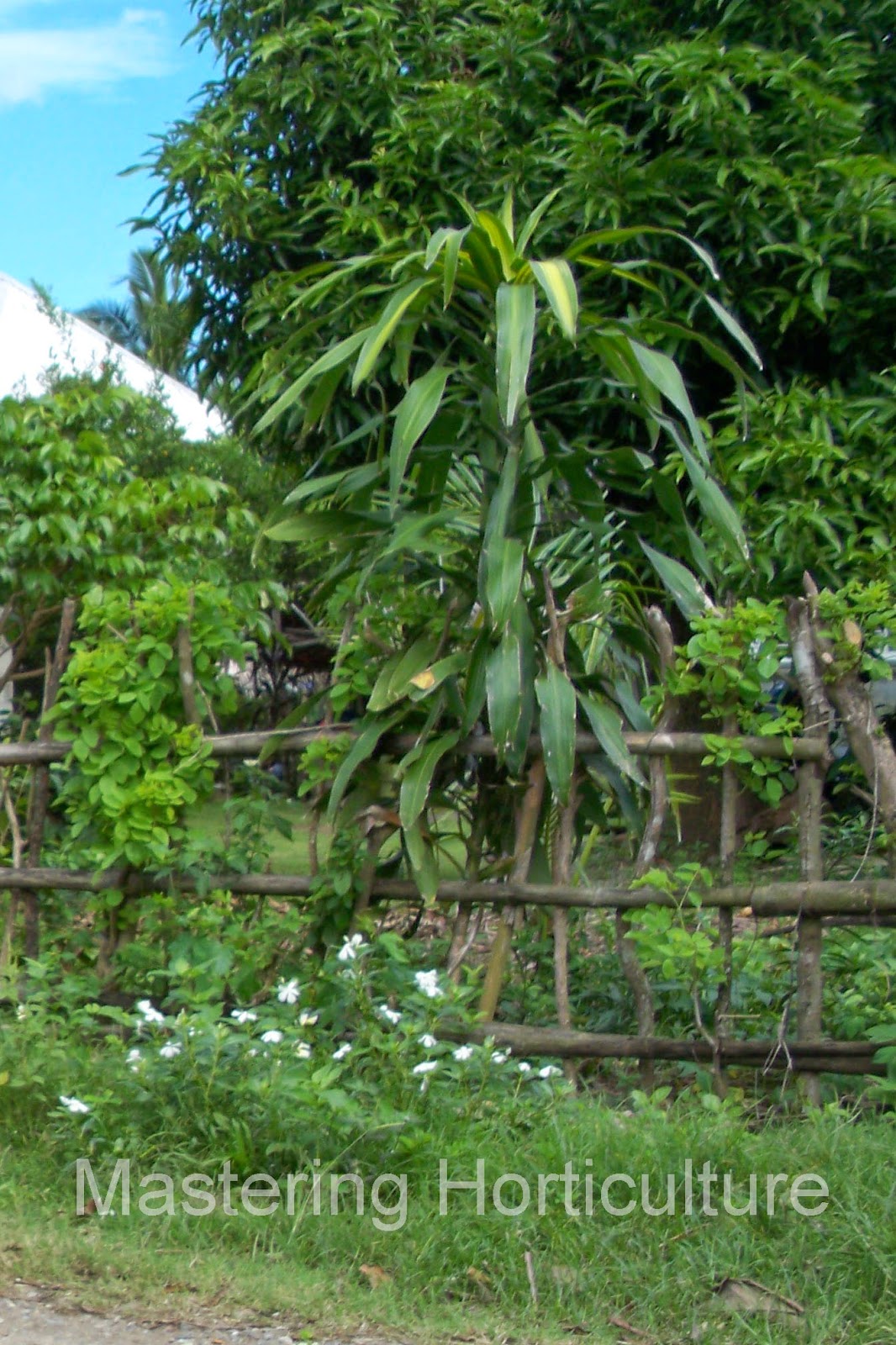 For me, it is not uncommon to see this plant bloom. My mother had one that bloomed outside her front door year after year.  Everyone who came to our house after dusk knew it was in bloom even if they didn't see the flowers.  Here in my house (in California), there are three potted Dracaena fragrans - one of them is about eight feet tall and the other two are about six feet tall - all of which I've had for years now.  I purchased these plants at different sizes.  It has been my observation that only the mature plants - with a minimum trunk diameter of one inch- showed flowers.  However, not all plants with the same size of trunk bloomed.  One of my plants did not bloom this year even if it has larger trunk than the other two that bloomed.  Therefore, I have to come up with another theory -- that the plant has to be exposed to not one but a combination of critical factors prior to flower initiation. I think the plant blooms when they reach a certain age and accumulated experience.  How to quantify such variables remain unknown to me.  I'm sure there are scientific literature out there that explain this mystery.  But before I find them, I will enjoy the secret belief that my Dracaena fragrans is signaling the arrival of good fortune into my house.  :).
. 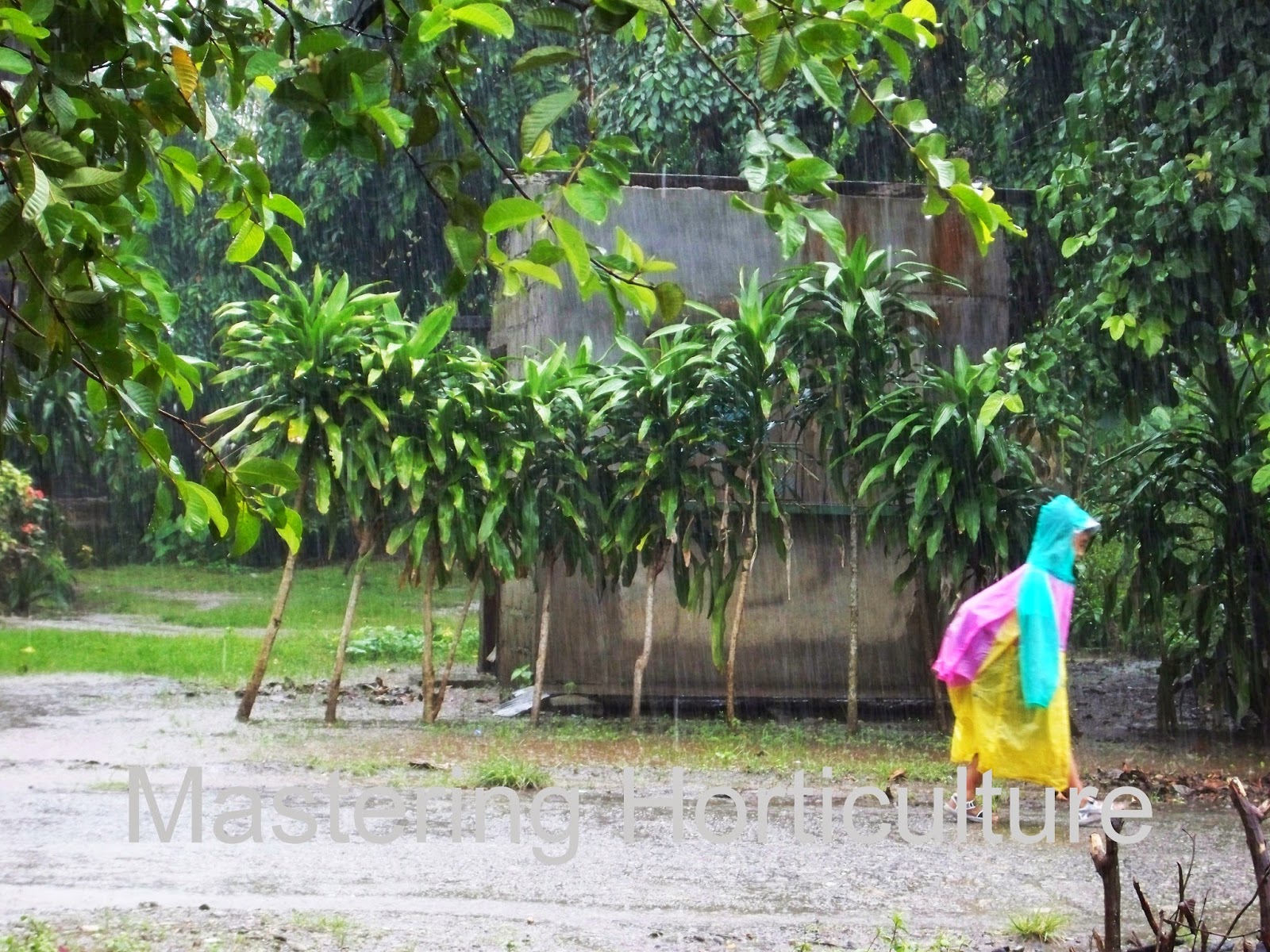 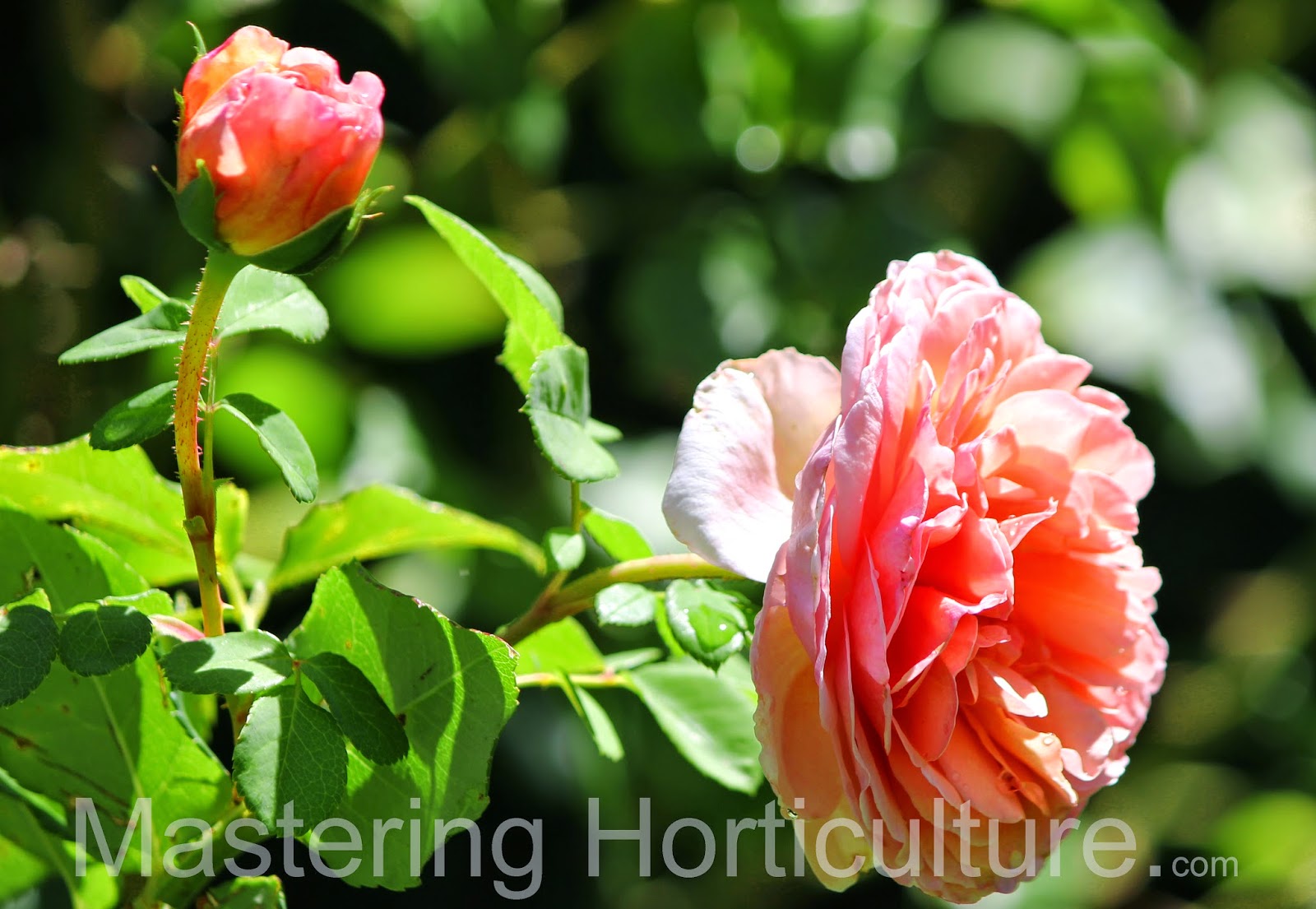 'Abraham Darby' is an English rose that was bred by David Austin. The flowers come in pinkish apricot color with a fruity fragrance and the leaves are small-sized and glossy. The plant is a vigorous medium sized bush with arching growth habit. Some consider it as a small climber but in my garden I prune it often both to keep the size in check and to encourage blooming. In my garden, I find 'Abraham Darby' resistant to black spot and powdery mildew.

'Abraham Darby' rose was named after an inventor who played a significant role in the industrial revolution. In the smaller world, however, this plant made it into my garden in honor of my son who is nicknamed Brahms. :)


Regardless of the name, Abraham Darby is a garden-worthy rose!