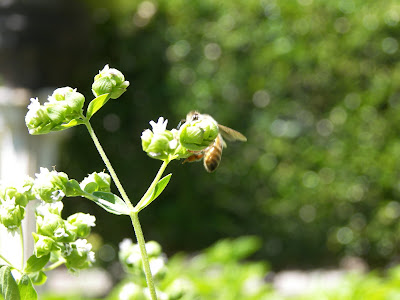 Greek oregano (Origanum vulgare): Nectar Producer
This season, there is a succession of insectary plants serving the pollinators in my kitchen garden.  For this year it started with the biennial flat leaf parsley.  Then there were the annuals such as cilantro, bok choy, radishes.  Currently, the Greek oregano plants are flowering and they are like haven for bees.  Early in the morning bees swarm the flowers and they eat nectar all day long until dusk.
Greek oregano is a drought tolerant perennial plant that grows up to 60 cm. tall.  It blooms profusely from July to September with white flowers that attract bees indicating a considerable level of honey potential.  Its small oval-shaped leaves are aromatic which made it an important culinary herb particularly in Italian cooking. 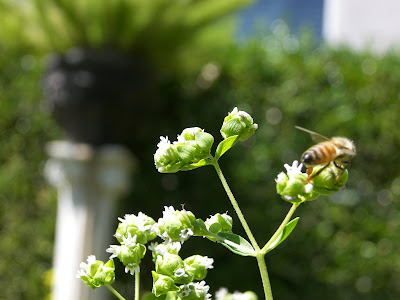 Origanum vulgare has white flowers.
For the bees, the plant is a source of food - nectar.
Plant one in your garden today to lure the pollinators to visit your garden regularly.
Posted by Helen Lewis at 9:52 PM

Nice topics & article posted on blog. I like these tips. This is great and important elements in the modern world that mean Oregano Greek. I have always wanted to know where all the yummy Vegan places were and now i can easily eat out at these place or order in! thanks so much!