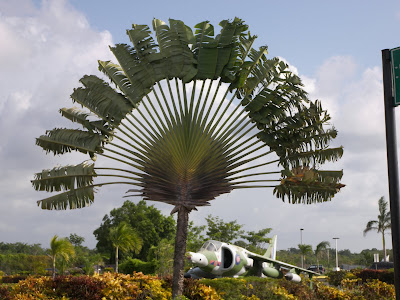 Traveller's Palm (Ravenala madagascariensis)
Looking like a giant fan, this Ravenala madagascariensis, commonly known as the travellers palm, waves at every visitor, like me, at the Belize International Airport.  When I saw it, I had to take its picture.  According to a guy we met in Belize, who eventually became our tour guide to Xunantunich the plant holds rain water in the folds of the leaf base and the flower bracts.  Since the leaves are huge, they can hold up to a quart of water per leaf.  Back in those days when bottled water was not invented, the travellers palm was a natural source of water for thirsty travellers.  That is the story behind its name.  I am assuming, however, that they were source of emergency water when they are still small plants.  It would be very inconvenient to chop down a huge tree just to get a drink. 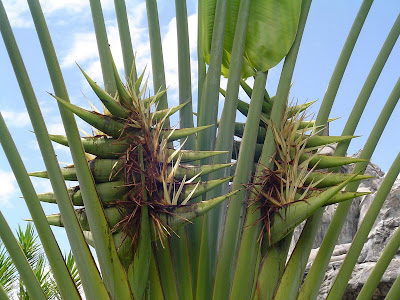 Traveller's Palm Flowers
In spite of its name, the travellers palm is not a true palm.  It is actually related to the birds of paradise (Strelitzia reginae) being in the family Strelitziaceae.  It is unique that it is considered monotypic, meaning it is the only species in its genus.  It is the only one in the genus Ravenala.  The species name, madagascariensis, denotes that the plant originated from Madagascar.  However, because of its unique characteristics and majestic form, people love it and so it has spread further away from where it all started. 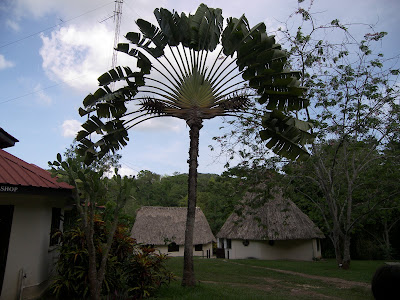 I saw this Travellers Palm at the Chaa Creek
Sometimes pictures cannot explain the real experience, but these should be enough to tickle your imagination and provide information so that when you see one you'll recognize it.
Posted by Helen Lewis at 11:05 PM