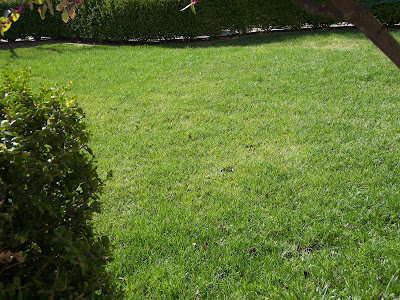 My lawn is just beginning to show signs of new growth. I like to leave it unwatered and unfertilized during the winter months. Low temperatures during this period induce the grass to undergo some period of dormancy; in California this period short.

Last week I applied a minimal amount of nitrogen to boost the initial growth slightly. I used 30-0-4 containing 1.29 percent pendimethaline, a pre-emergent herbicide. Pre-emergent herbicide arrests the emergence of weed seeds. Since it works only on seeds, timing is very important consideration in its use. Heavy rains during application can diminish the effectiveness of the herbicide.

March 15 is the recommended time for spring-application but in California it could sooner. Last year I was late; some of the weeds already emerged when I applied herbicide. The weed population was reduced but not totally eradicated. That's why I'm experimenting this year on an earlier schedule.
Posted by Helen Lewis at 4:16 PM