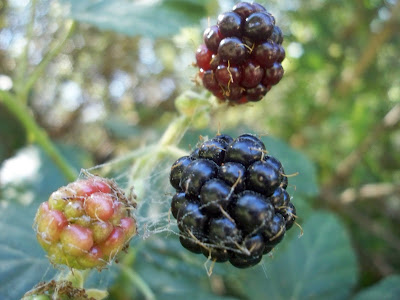 Wild Blackberries (Rubus fruticosus)
While wandering in one of the Redwood forests along Hwy 101 we came across a healthy patch of blackberries.  Although the samples we picked were sour, one can hardly ignore the aesthetics of the reproductive stages of the plants.  So I decided to talk a little bit about the nature of the blackberry fruit. 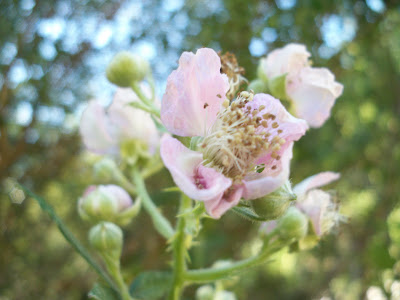 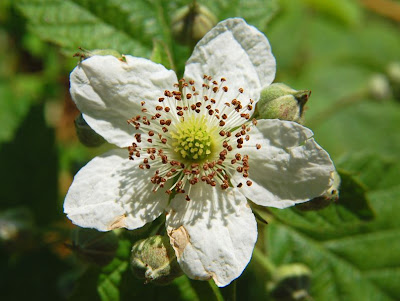 Blackberry Flower - Photo by Luc Viatour
Single Flower Multiple Ovaries.  The blackberry flower is composed of multiple ovaries.   Each of the yellow-green structures in the middle of the flower (above photo) is a stigma leading to an ovary that contains the ovule.  The brown structures surrounding the ovary are the stamens which bear the pollen grains.  Upon fertilization, the ovule turns into a seed that is enclosed in the fleshy tissue of an enlarged ovary- thus, a fruit is formed. 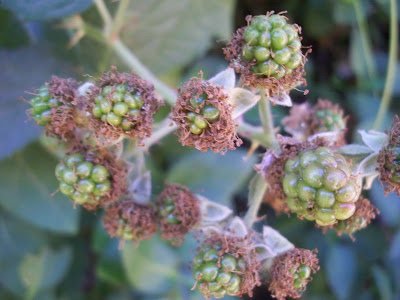 Drupelets for an aggregate fruit.
One Aggregate Fruit Many Drupelets.   Multiple drupelets (fruitlets) form one aggregate fruit.  The blackberry is an example of aggregate fruit in botanical terms.  Each aggregate fruit comes from one flower; it is composed of many drupelets held together by a common receptacle.  Individual drupelets, like any normal fruit, develop only when the ovule is fertilized.  The size of the aggregate fruit is highly determined by the number of drupelets that develop.  As seen in the picture below, some flowers fail to develop fruits because of unsuccessful pollination.  Staggered ripening is reflective of staggered pollination and fertilization of the ovules. 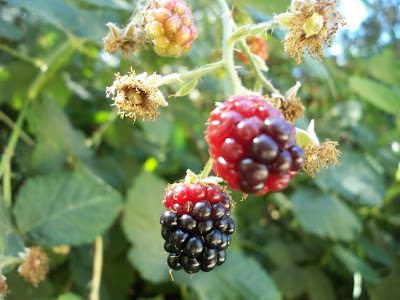 “On the motionless branches of some trees, autumn berries hung like clusters of coral beads, as in those fabled orchards where the fruits were jewels . . .”

Email ThisBlogThis!Share to TwitterShare to FacebookShare to Pinterest
Labels: Fruits

thank you Helen, an interesting study...loved the first photo especially...

Aggregate fruits were part of a course I took in horticulture but I never really understood it until I saw those first two photos in this post. A picture tells a thousand words remains true. Thanks.