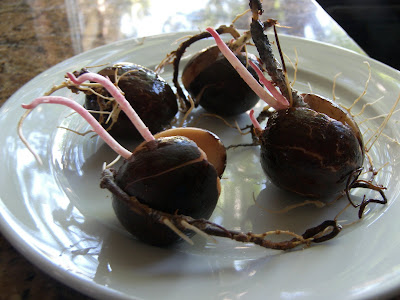 One month in darkness.
I was delighted to hear that my friend’s son, Erich, announced that he wanted to grow his own avocado tree. Being someone who advocates gardening, I decided to help him achieve this dream; I stated to germinate four avocado seeds for him using my self-proven paper towel and sandwich bag technique that I described in an earlier post.  I kept the sandwich bag that held the seeds near the kitchen sink and close to the window for some light. Emergence was observed beautifully - the radical (the first root) and the plumule (the first shoot) growing in opposite directions. Everything was happening as I had expected.
Once every three weeks I host a bible study group at home.  During each time, I clean the house as if my guests would question my character if they saw something growing in my kitchen.   The avocado seeds were not going to be seen.  So I placed them in the cabinet under the sink temporarily.   They were out of sight...then they were out of my mind.   A month later I found  them... 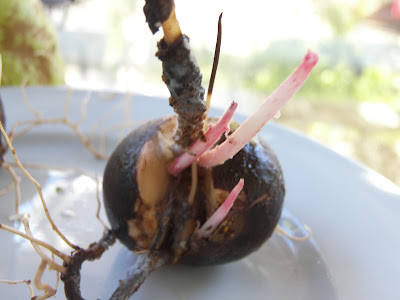 Death of the main shoot resulted in branching.
Apical Dominance.  The growth from the embryo was thwarted by the lack of light in the cabinet.  The initial plumule and radical died back and apical dominance was broken - allowing several, instead of just one, shoot to grow.   This is similar to the phenomenon that occurs when any plant stem is decapitated or stressed - lateral branching is increased.  Auxin, a phytohormone, is produced in the growing points of a stem or root.  When the dominant stem loses its strength the lateral branches gain power.
Absence of Chlorophyll.  The lack of light is clearly manifested in the color and growth behavior of the new shoots. When plant tissues get any amount of light, the presence of chlorophyll becomes evident. In the case of these seeds, the shoots are white to pink which indicates that they have never seen the light. 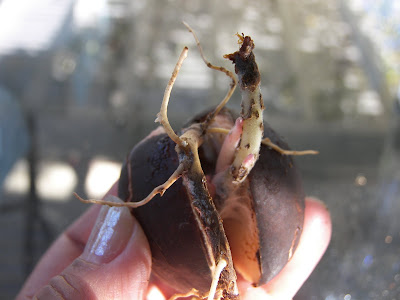 Stress on the main root induced the growth of lateral roots.
Another avocado seed is germinating in my kitchen... :)
Posted by Helen Lewis at 11:54 PM

I really enjoyed reading this - never realised that you could bring on a seed like this.


Those shoots remind me of plenty of folks that have never seen the light either - still living in darkness.

Sometimes neglect can do wonders, though! A friend of mine had back surgery and had to cease all gardening activity for about 6 months. Once she was well enough to pick up some chores again, she checked on her compost pile, only to find 18 vigorously growing avocado plants. She was delighted, having not been able to start any with the traditional methods. I adopted one and it's still doing great :)

leavesnbloom-- You are so right! In darkness life may go on amidst decay - constantly struggling to find fulfillment and abundance. However, only through the light will these things be found.

I think I'll give this illustration to my pastor. :)

Suzie-- Indeed things do happen without us! We often assume that we are in control of our gardens but it appears that there is a "great mastergardener" who takes care of even the little seeds in the compost pile when we are sick.

Hope your avocado tree will continue to grow. Happy gardening!

I remember having so much fun the first time I germinated an avocado seed. It's a shame that the ones we sprout are unlikely to ever produce fruit, but it's still exciting to see them grow!