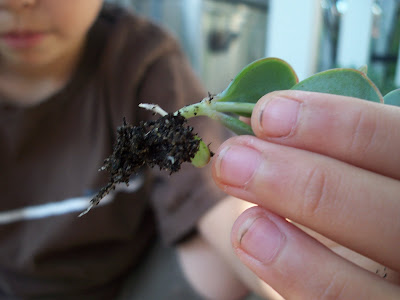 Young roots from stem cuttings.
Root growth from a stem cutting or a seed comes from within.  The stimulus for root growth is brought about by external factors such as air, temperatures and moisture.  Deep within the tissues - a reaction is triggered.  The root is only an expression of that internal changes that happens deep within.   Similarly, any passion or desire to do anything is not forced.  Instead it starts internally as a response to ones experiences.
One of the amazing things that happened this summer is the conversion of my children into plant propagators.  This happened after visiting Filoli gardens and seeing the succulents displayed for sale.  Suddenly they believed that they can make money by cloning and selling plants.   They have responded to the stimulus around them.  The things that they see me do on a day to day basis and the promise of earning money as exemplified by a public garden (Filoli) triggered a response in them.
Now every morning they would go out in the garden and water their own plants.  Just like a seed or stem on the ground, my kids are beginning to root.  My role is to continue to provide them with favorable environment for this new passion to grow deeper.  If my children are interested in gardening then I must have contributed slightly to the initial influence that triggered them to think about it. 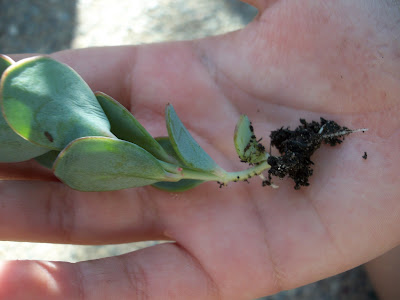 Roots getting ready to explore wider and deeper.
Have you influenced someone's roots to emerge?
Posted by Helen Lewis at 11:35 PM

What a great idea! My children are all about making extra money and this is an easy project for them. I wish your children much success in their endeavor. :)