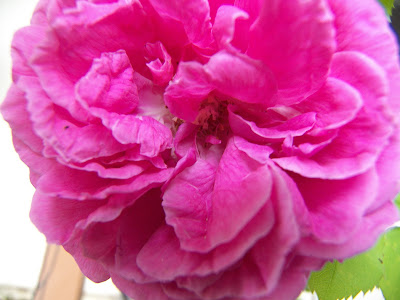 Rosa 'Madame Isaac Pereire'
The rose 'Madame Isaac Pereire' in my garden technically belongs to my husband because he purchased it with his own gift certificate.   He got it as a present from my mother-in-law.   Originally we planted it close to the patio door where we could enjoy its fragrance easily.  However, that place has become too shady so we moved it to another place for more sunshine.
This rose is very beautiful with a deep and clear pink color.  I wonder if this is not the basis of the true "rose pink" color.  The plant is a shrub or a short climber.  In my garden it has not proved to be a vigorous grower, so far.  There seem to be more stems and branches showing than leaves.  I am not sure if this is because of the location or my management techniques.  This is to say that I have yet to see a beautiful plant not just flower in her (Madame Isaac Pereire). 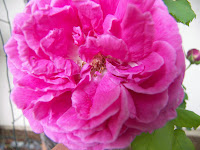 Rosa 'Madame Isaac Pereire':
Rosa 'Madame Isaac Pereire' is an old Bourbon type rose (originated on the Île de Bourbon and first introduced in France).  During the reign of Jules Grévy (French President of the Third Republic), the rose was hybridized by Garcon in 1881 in France but was first introduced in England.  From there it was considered the most fragrant rose.  With the amount of petals produced in every flower it became a prized material for potpourris which was very popular at that time.  It was eventually named after the wife of a well-known Parisian banker.
It is my observation that 'Mme Isaac Pereire' blooms on old wood.  Pruning need to be done only to remove the spent flowers to maximize subsequent blooms.   It also tends to produce beautiful hips (rose fruits) which may become competition for new flowers if not removed.  On the other hand the hips can be a beautiful accent on the plant in the absence of flowers.
Stroll in your garden and smell the roses.
Posted by Helen Lewis at 3:50 PM