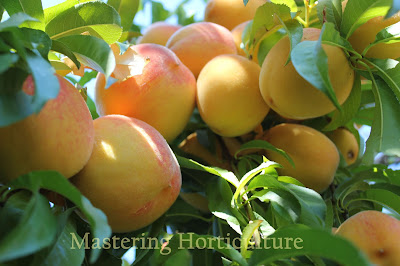 Too much of anything is not a good thing.  There is balance to be observed between that which is beneficial and that which is permissible for a healthy life - plants included.   This year we were delighted to see a beautiful crop of peaches which is attributed to the absence of leaf curl infection.  The drier weather from late winter to early spring was not conducive for the proliferation of the pathogen Taphrina deformans.  In previous years, the tree would lose all its early leaves leaving the developing fruits to starve until the new set of healthy leaves come out.  Sometimes the fruits also get infected which results not only in low yield but poor quality crop.

As the fruits grew larger under the summer sun, the problem slowly surfaced.  The slender stems laden with fruits began to hang straight downwards.  One of the larger branches was so heavy. I was afraid that it might break.  We had to prop it up with three pieces of 2x4x8 lumber.  I admit that my tree is not in its best form.  Pruning on this tree has been mainly for the purpose of making sure it does not arch into our neighbors' yard.  (I doubt they appreciate peaches falling into their swimming pool.)  This effort has led to the formation of a lop-sided tree.  It is a nice tree but it not strong enough to bear a heavy crop. 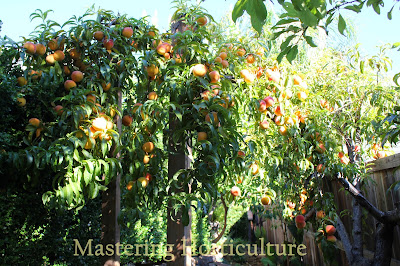 A heavy fruit load can be detrimental to the tree.

Based on the situation described here, the problem that needed to be addressed is excessive fruits.
Under favorable growing conditions, such as what we had this year, fruit trees set more fruits than they can support adequately.  And this problem is magnified when trees have not been properly pruned in the previous season.  A heavy fruit load can result in branch breakage.  When there are too many fruits competing for carbohydrates, the fruits cannot reach their optimum size.  The tree also gets nutritionally deprived and weakened - making it more susceptible to pests and even sunburn damage.  Another possible effect of excessive fruits on trees is alternate bearing (the cycle in which the tree bears a heavy crop in one year and a skimpy or no yield in the next).  This phenomenon happens when the tree is nutritionally deprived while supporting its fruits - a situation that will continue to plague my tree until I will muster enough discipline to remove the excess fruits when they are young. 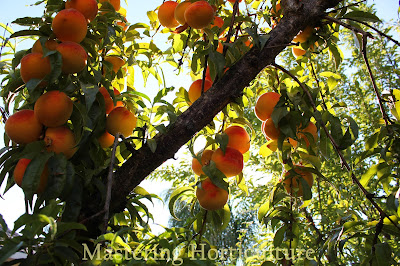 Rule for fruit thinning:  Mature fruits should not be touching each other.

Peaches are among the fruit trees that require fruit thinning for best results - superior quality fruits are produced while maintaining a healthy tree.  As a general rule, allow room in between fruits so that at maturity fruits should not be touching each other.