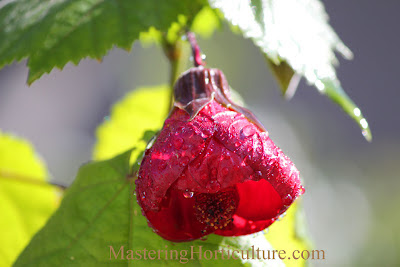 Fig. 1      Abutilon x hybridum - solitary and pendent flower. (February 15, 2012)
New Plant for My Garden
Last fall, I bought a foot-tall blooming Abutilon plant from the Farmer's Market in Placerville. Winter is almost over and the same plant remains blooming and seemingly unrelenting (Fig.1). The plant has flower buds that come out wrapped in a blackish red calyx (Fig. 2) which eventually opens into a bell-shaped pendent flower with overlapping dark scarlet petals and even a red peduncle (Fig. 1).
Twelve years ago when there were no tall trees in my backyard, I planted my first Abutilon and I was very pleased with its vigor. Sadly, on its third year, it began to shade some important plants round it. It had to go in favor of the other ones. But because of its desirable characteristics as a plant, I bought this new plant (Fig.1) as a replacement for the old one. 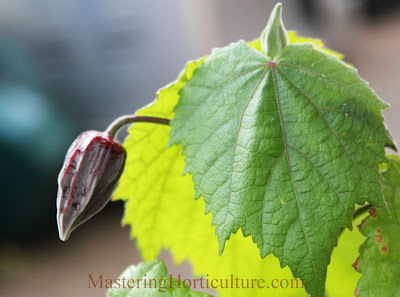 Fig. 2     Unopened Abutilon flower
About Abutilon
Common names include: Flowering maple; Parlor maple; Indian mallow; Chinese lantern, etc.  They are closely related to Hibiscus (Malvaceae family).  They are occasionally referred to as "maple" because of the resemblance to the actual maple trees in the shape of the leaves being palmate.
Abutilons are evergreen small trees that can grow up to about eight feet tall. They are fast growing  plants. Given the right conditions they can reach their potential height on the second year.   They bloom almost year round in our area. Of the numerous varieties, the most popular ones bear solitary and pendent flowers like the one I have now (Fig. 1 and Fig.2). There are some that bear flowers in panicles - dangling like their solitary counterparts.   Green Acres, the mega nursery in the area, currently offers a wide selection of Abutilon.
Tips in Growing Abutilon
1.  Microclimate.   Abutilons like places with a lot of light up a point when temperature interferes with its growth.  In hot and dry areas like here near the Sacramento area, the plant prefers to grow in a sheltered south-facing location.  Afternoon shade helps reduce excessive transpiration and scorching of the flowers.  On the other hand, in places with cooler temperatures and more rains, full sun would work well.  Always remember to garden with microclimate instead of the generic recommendations for your plants.
2. Fertilization.  Being fast-growing and ever-blooming,  the plant benefits from adequate fertilization.  Phosphorous fertilization during the first and second year of growth ensures a strong root system.  If it is grown in a container then regular application of a slow release balanced fertilizer is more important than those planted in the ground.  The plant is responsive to fetilization as much as it is expressive of nutritional deficiency.  Chlorosis is the first sign of nitrogen deficiency but make sure that it is not caused by insufficient or excessive watering.  In general, I withhold fertilization starting in late fall to allow my evergreen plants to rest a little.
3.  Pruning.  The plant may be pruned to regulate its shape and size. In the spring it is best to prune the tree, removing all branches that have died during the previous season, before the temperatures warm up.  Pruning may be done anytime to remove branches that stick out of place and also to encourage branching for a fuller shrub.
Abutilon: evergreen and ever-blooming perennial for the protected sunny location in the garden.
Posted by Helen Lewis at 9:56 PM

Pura Vida -- Thanks for following my blog. I'm honored. Hope that you find it relevant. Cheers!

A beautiful plant for the garden, but sadly not hardy in my zone. I'll just have to admire yours from afar.