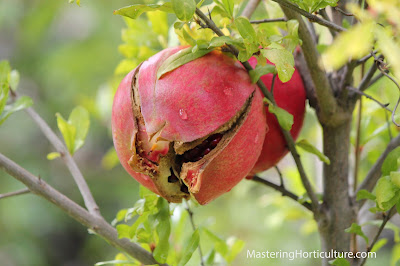 After we had the first real rain this month, I saw that some of the fruits from the pomegranate tree cracked.  The plan was to keep them on the tree till December so that we will have an abundance of red color in the kitchen.  But I guess we'll just have to eat some of them sooner.  :)

Why do pomegranates crack or split?

2.  Inconsistent watering.  Sometimes fruits split when watering is inconsistent.  When the plants undergo incipient wilting prior to watering, the fruits tend to split.  This phenomenon can also be observed in other crops like tomatoes during the summer after a spell of hot weather and plants are given more water to compensate for the wilting.

3.  Some varieties are more susceptible to splitting than some.  Although I would say that genetic attributes of a plant fail to deliver when cultural management are not up to par.  This pomegranate in the picture is 'Wonderful', known to be resistant to cracking.  But because it is growing in a container, the soil is often on the side of dry.  While the tree can survive on less water, the sudden rise in available water triggers extreme physiological changes defying that which genetics was meant to accomplish. 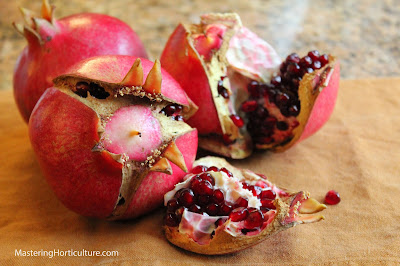 When the pomegranate fruits crack open, it must be time to eat them.  :)
Posted by Helen Lewis at 2:15 PM