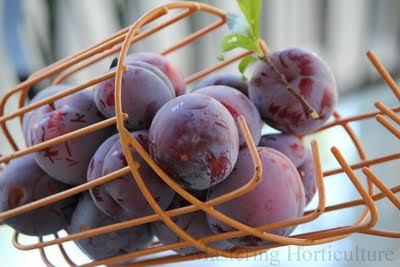 This summer, the number of days we spent at home was less than that which we spent away from home. Whenever we came back from our trips, I was always trying to squeeze in some time to garden but then there was a huge mountain of laundry to work on. Then there were fruits to harvest and eat that we could not keep up with. So then there were fruits to can. As a result there was even less time to garden and zero time to blog.  But as the masters of the garden, we ought to choose the things we need to do. 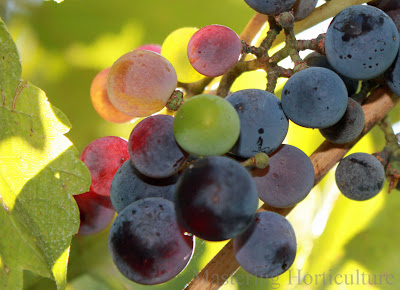 Plums.  Compared to previous years, the plums (Fig.1) were late this year.  However, with our busy summer schedule, timing was perfect - the fruits were ready during a two- week-period that we were home.  So we harvested them and gave some to our friends.  I canned plum sauce - a family favorite as pancake topping.

Grapes.  The main purpose of my grapevines is to provide shade.  In other words,  they are grown primarily for the foliage and not the fruits.  Nonetheless, we get enough fruits to make at least four quarts of jelly annually from the two Pinot noir.  We get more if we do not wait for the larger birds (blue jays and robins) to get them first.  I have one Zinfandel grapevine but it did not have fruits this year probably because it is now shaded by the ornamental pear that is planted next to it.  In spite of that, it still gives a lot of shade. 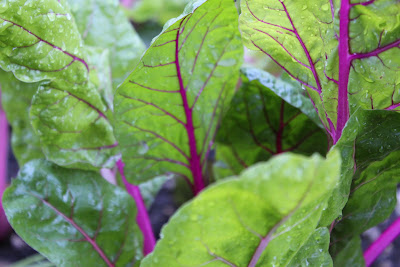 As summer approaches it end, the Swiss chards continue to  grow without any sign of bolting (flowering). They have taken a great deal of heat during the summer and I admit that I left most of the watering to the sprinkler system.  This would be totally alright but in our place there are days when the temperatures just get so hot - supplemental watering becomes necessary.  As the plants put on larger canopies,  the sprinklers need adjusting so that the water still gets to the right place.   Swiss chards proved to be tough in this climate and in my garden.  However, the leaves are decreasing in size and showing slight sign of chlorosis or yellowing (Fig.3).  I will try to prolong their production time by adding a little bit of nitrogen fertilizer.  I am curious to see which factor will stop them from growing - whether temperature, or flowering. 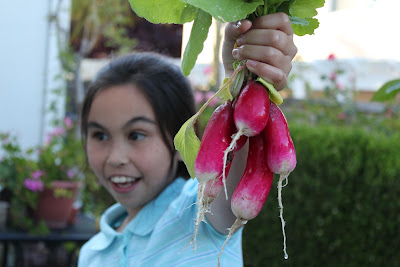 Radishes.  Unfortunately, we got to eat only a few radishes.  They were overgrown by the time that we had time to consume them.  I left some plants to flower just to encourage the pollinators to stick around and to allow the plants to produce their seeds for the next crop. 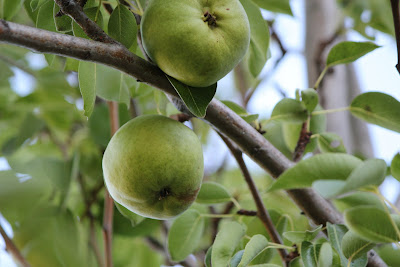 Pears.  We have a good crop of pears this year.  Coddling moth infestation still managed to leave  signs of their presence in some fruits but the infestation is dramatically reduced compared to that of last year.  This could be attributed to the insect trap I used in the early spring.  I believe that it would have been more effective if I had installed more than one trap per tree.  Recently, I learned that it is a good idea to have moth traps from April to September and replacing them as necessary.  I'll try that next year.

Most of the branches are bent severely downward (Fig. 5) because of the heavy fruits.  Fortunately, the branches are pliable.  Another to-do-item is pruning the tree this fall.  So far, jars of pear butter line one of the counter tops in the kitchen - and yet we still have so many fruits hanging on the tree up to this time. 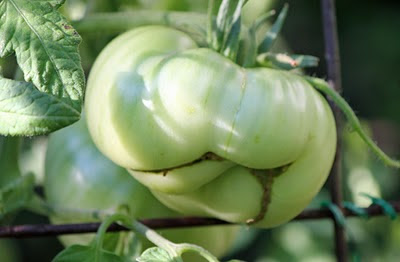 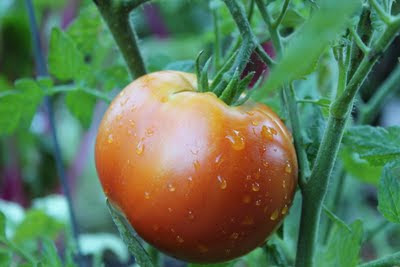 Tomatoes.  My tomatoes are late this year.  They are at the peak of their production now and yet autumn is here.    The heirloom tomatoes (Fig. 6)  are very sensitive to heat.  The plants basically stopped setting fruits during the hot months and are just starting to fruit again.  At this rate, there will be green tomatoes in the Thanksgiving menu.

Apples.  The Fuji apples are almost ready.  The crabapple fruits are abscising (falling off) from the tree but I do not know what to do with them.  They are so tiny to make into anything of consequence - or am I wrong?

Pomegranate. The pomegranate tree did not produce any fruits yet.  It's been a year since I brought it into my garden.  It flowered in early spring but the fruits did not set.

Grow your food in the neighborhood of your kitchen.
Posted by Helen Lewis at 1:51 PM

Yum! This post makes me hungry, and your photos are wonderful. Your daughter (?) is a cutie. Enjoy the harvest!

What a great harvest! And the photos a great too.

2011 was a catastrophe for my grapes. I don't know what happened. I am happy for you for your great crops.

You grow so much in your garden. I only grow flowers. I think next year I might try an heirloom tomato. Great harvest.

What a successful vegetable harvest you had! Everything looks delicious, and to me the plums are mouth-watering.

We have lots of grapes that are not ripening. I can;t understand it. This time last year, I was almost done harvesting them. About a month ago they started to ripen and there were several clusters of fully ripened grapes, which the birds snatched. I thought, no problem, look at all these grapes, there will be more ripening any day. Unfortunately, it's not happening! Here's hoping they are simply late bloomers LOL. Last summer they were so sweet and tasty -- I've been waiting and waiting for a repeat performance!

You seem to love gardening there too! I love the grapes and plums among them.

I hope you're having an awesome week! I thought you might like this infographic I helped build about the health, mental, and financial benefits of gardening (http://blog.lochnesswatergardens.com/how-gardening-benefit/).

If you think your readers would like it too, please feel free to use it on the Mastering Horticulture blog. There's code at the bottom of our post that makes it super easy to post on your blog. It's all free (of course). If you have any questions about posting it, let me know and I'll try to help.

Quite a harvest you have, Helen. All look so good and delicious. I envy you your grapes. I tried growing some this year but have had a tough time keeping the grasshoppers off. I hope I get something as nice as your harvest next year.