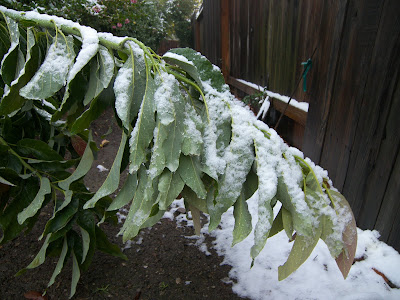 This avocado (Persea americana) plant has been in our yard for at least three years now and is doing great.  It was planted by Brahms and Miriam from a seed.  After this snow storm, I'll find out if it can withstand short periods of freezing temperatures.  The size of the leaves is detrimental since it allows snow to collect on them.   The deciduous temperate trees are better off because they already have dropped their leaves.  I observed that avocado is evergreen.

The snow destroyed my Calamansi (Citrofortunella microcarpa) plant.  It was laden with fruits but it did not stand the snow...it snapped...again.  I've always tried hard to have one in my yard but for the third time, I failed.  Calamansi is a favorite fruit in the Philippines.  It is a citrus plant with small rounded fruits.  It has a very strong pleasant smell.  It is used in cooking and as a drink (like lemonade) rarely eaten as a fruit since it is very sour.

Some of the herbs in pots were brought into the garage last night for protection.  The succulents are all outside still.  They were covered with snow this morning but I watered them to hasten the melting of the snow.  I thought that the shorter the exposure to low temperatures, the better chance they'd have to withstand cold.

Tonight is still very cold.  Right now the temperature is 37 degrees F and still going down.  It is a good idea to bring in your sensitive plants in a sheltered area or cover them with burlap.  Also protect your pipes so that they will not freeze.

Stroll in your garden...it's good for you and your plants.