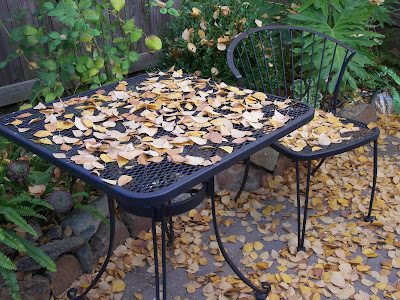 Once again we've come to a new season.  Fall is here.  Just like the other seasons, fall is triggered by a change in the angle that sunlight strikes the earth's surface.  The amount of solar radiation upon the earth known as insolation (different from insulation) determines the seasons.

Plants exist to photosynthesize (produce).  Plants photosynthesize using energy from sunlight.  Therefore, whenever gardening is the subject matter, seasons will always be a major consideration.

Change in temperature.  Last week we have experienced a significant drop in temperature.   Fall comes as the long awaited relief from the hot summer temperatures.  Warm temperatures will still be around for a while (here in California) but the maximum temperatures will occur in shorter periods resulting in less stress for the plants.   Water loss through evaporation and transpiration will also be reduced.  It is wise to adjust irrigation schedule at this time.

Change in Daylength or Photoperiod.  Photoperiod is the length of time, expressed in hours, when plants are exposed to sunlight during a 24-hour period.  Around summer solstice days can be as long as 15 hours (14 hours and 49 minutes) and from there they get shorter everyday until they are as short as 9 hours and 30 minutes at winter solstice.  By fall, the change is significant enough that the plants will begin to respond.  Photoperiod affects some of the processes in plant growth including germination, flowering, tuberization, and abscission.  Plants are sometimes classified as either short-day, long-day, or day-neutral depending on the daylength that is required to initiate their flowering.